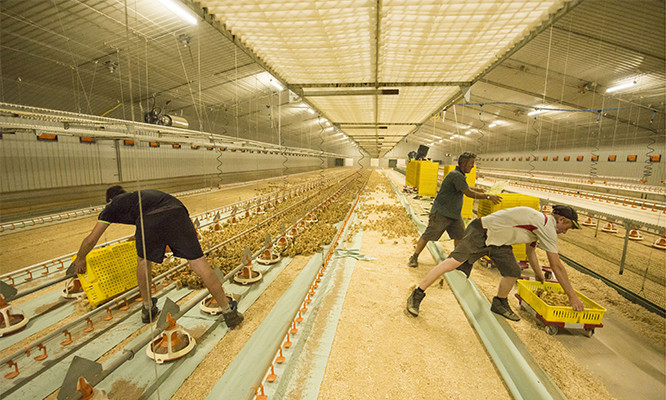 “There needs to be greater investment in training future generations to be able to run units efficiently and effectively." Photo: FLPA_JOHN EVESON_REX_SHUTTERSTOCK

While the industry continues to grow in the face of ever-growing demand, highlighted by Cranswick’s £54m investment at its poultry processing plant in Eye and the creation of 100 new jobs at 2 Sisters Food Group’s plant at Flixton, recruitment companies and training providers say it is hard work to match the right staff for the right company in the right place.

With Office for National Statistics migration figures showing a sharp fall, anecdotal evidence that Brexit is leading to the departure of a number of migrant workers back to Eastern Europe and the number of apprenticeships falling due the introduction of a levy in April, there are growing calls for government action.

The British Poultry Council (BPC) in its manifesto for Great British Food Values said the government needed to commit to creating flexibility in the use of apprenticeship funding to build skills and jobs for UK workers. It also wants to see a visa system that affords access to migrant labour where UK labour is unavailable.

Edward Bates, founder of poultry training provider Poultec, said there was evidence of food and poultry processing companies and hatchery businesses struggling to fill roles but the situation in the sector was not as bad as some of the recent national figures around falling apprenticeships.

Department for Education figures have shown apprenticeship numbers falling by 59% since the levy was imposed, with just 48,000 people beginning an apprenticeship between May and July this year compared to 117,000 last year.

Poultec is involved in working with around 300 poultry apprenticeships – down from a height of 400 prior to the introduction of the levy.

Nathan Raines, Poultec associate director for manufacturing and agriculture, said the new “trailblazer” standard poultry worker apprenticeship scheme, aimed at farm operatives and hatchery staff and the poultry technical apprenticeship, which is geared towards assistant and farm managers – was progressing.

“The actual criteria covering skills, knowledge and behaviour has been established and done. The next key section has been the establishment of the end point assessment.

“Each apprentice under this scheme needs to have a half or one day independent assessment and that is currently going through the Institute of Apprenticeship.

“We hope to be able to launch these new apprenticeship standard schemes in the new year and will market this to schools and colleges across the country.”

Bertie Steggles, livestock divisional manager for recruitment company JP Trett, said higher wages and greater levels of investment in training were needed in the sector in order to stave off a skills shortage.

Mr Steggles said there were more roles in the poultry sector to fill than in the past: “There needs to be greater investment in training future generations to be able to run units efficiently and effectively. With the development of technology growing apace, people need to be able to understand what is going on and what the challenges will be.

“Agriculture is no longer a business where you can simply ride a tractor or collect eggs. You have to have an understanding and knowledge of computers,” he added.