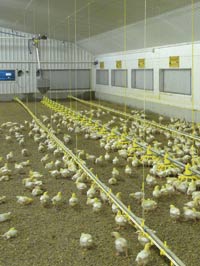 Three men have been sentenced for breaching meat hygiene regulations at a Yorkshire poultry processing plant with offences including bleaching meat to make it appear fresher.

Yakub Yusuf, his brother Ibrahim, and Nabil Allibou had previously admitted the breaches at Halal Meat and Poultry, Dewsbury, West Yorkshire which they ran.

At Leeds Crown Court, Yusuf was jailed for four and a half years, Ibrahim for 30 months and Mr Allibou, who had played only a minor role, was given a 24-week suspended jail term.

Passing sentence Judge Paul Hoffman said: “This is a case of wicked, deliberate and highly culpable breaches of the food safety laws. You were hypocrites too, because while offering Halal meat which many would have taken as a guarantee of quality, basic rules of food hygiene had been completely ignored, exposing large numbers to the dangers of food poisoning.”

Evidence had been given at the original trial that meat had been soaked in bleach to make it appear fresher. The premises were described overall as being in a filthy state.

At the trial the two brothers had admitted the offences of putting animal products on the market without identification and failing to ensure premises and equipment were clean.

“This criminal activity could have put many lives at risk. Food hygiene rules are there to protect all of us and we are committed to helping local authorities take action when they are breached.”