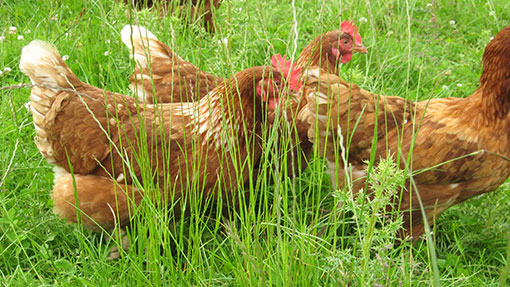 When it comes to organic egg production there is no room for part measures, according to Shropshire producer Shane Brettell.

Running 6,000 British Blacktail laying birds at Smethcote Manor, Hadnall, Mr Brettell not only rears his own organic pullets, he also feeds 100% organic diets from the day-old chick through to end-of-lay.

This is despite an EU derogation allowing organic producers to buy in conventional pullets and then manage them organically, and for feed to contain 5% non-organic raw materials.

Chicks arrive in batches of 2,000 on the farm and are housed in a fully-insulated and disinfected rearing shed with lowered heat lamps and hardboard partitioning, which is moved outwards to widen the area as the birds grow. To ensure even growth, all hatching eggs come from a single-age breeding flock between 30 to 50 weeks of age.

For the first week or so feed is provided manually, and thereafter by automated feeders. All vaccinations in the rearing stage are administered via a dispenser into the water-flow and regulated accordingly.

In order to be fully organic, pullets must have access to pasture from at least 12 weeks onwards at a stocking density of no more than 2,000 birds/ha. But at Smethcote Manor, birds are encouraged to range from 10 weeks until they are 16 weeks old, and are then moved to the laying unit.

Mr Brettell believes getting the birds to range early means they are used to the outdoors and become more accustomed to the hustle and bustle of the farm. He sees this as pivotal to welfare – a point supported by research from Bristol University, which shows reduced incidence of feather pecking when a higher proportion of the flock goes out and range.

Throughout the rearing period, birds are subject to a three-stage feeding programme which comprises organic starter, rearer and grower diets which, like the layer diets themselves, are 100% organic.

“The all-organic diets deliver both on performance and welfare, and I reject the notion that a proportion of conventional feed is needed to balance the diet,” he says.

“We moved to 100% organic diets across the board in early 2012 and we saw no deterioration whatsoever in performance, nor did we experience the feather pecking and stress behaviour predicted by some sceptics. Using assessment criteria such as egg numbers, egg quality, feather-cover and ranging, the birds excelled in all departments.”

Feed is manufactured by Hi Peak Organic Feeds which, as an all-organic mill, helps eliminate the risk of cross contamination between organic with non-organic feeds, something Mr Brettell cites as extremely important. He also says there has never been a problem with sourcing 100% organic diets and believes the key to achieving the right balance is the use of a wide range of raw materials rather than reliance on just a few.

Mr Brettell considers some of the arguments raised against 100% organic feeds are based on non-organic principles, namely the desire to maximise production. He believes that organic farming should emphasise quality production and meeting nutritional requirements to underpin its appeal.

The enterprise is split into three 2,000-bird flocks which complements the four-monthly turnaround of the rearing units. Mortality comes in at below 1% for the pullet-rearing and below 3% for the layers.

Egg production is 95% at point-of-lay and 80% at finish – giving an average of nearly 85% overall, equivalent to around 290 eggs a bird. The British Blacktail eggs are sold to Stonegate, which grades and packs them for sale to Waitrose. While there is no extra premium for being 100% organic, Mr Bettell derives benefit from better pullets, better ranging and high feed assurance.

The operation is low cost and based on family labour.

In addition to the organic poultry, the 110ha (272-acre) farm supports organic mixed beef and organic cereals. Part of the farm’s home-grown organic cereals is sold to their feed supplier, so that when feed is be delivered, grain can be loaded for the return journey.

The Brettells believe that organic farming is about ensuring a closer relationship between farmer and livestock, providing healthier animals that are more attuned to the natural environment.