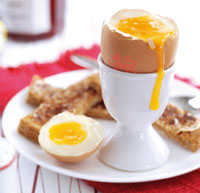 British Lion eggs has begun its latest campaign to increase egg consumption by appealing to dieters and those conscious about their weight to eat more eggs, highlighting their ability to make you feel fuller for longer.

Four organisations in the UK are being specifically targeted, Slimming World, Weight Watchers, Rosemary Conley and Scottish Slimmers, with recipes to be included in publications that take only minutes to cook and are light on calories.

“Research shows that eggs can help you keep fuller for longer and that makes them an ideal choice for slimmers and their families,” chairman of the British Egg Industry Council, Andrew Parker, said.

“There is an opportunity to encourage consumption across meal occasions and we expect the campaign to help drive retail egg sales by reinforcing the ease of cooking with them.

“We want to inspire people with quick and easy meal ideas that they can cook for themselves and their family at a small cost to their wallet and waistline.”