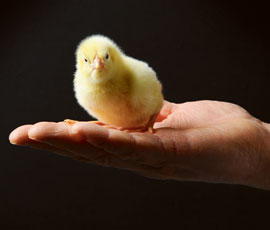 Uniformity in the treatment of eggs in the hatchery is critical for consistent quality in birds, from the breeder unit right through to placement on-farm, according to veterinarian Barry Thorp of the St David’s Vets Poultry Team.

“What you want is minimal variation from the hatchery if you want good flock performance, be it broilers, broiler breeders or pullets,” Dr Thorp told the recent Society of Feed Technologists conference in Coventry. “The correct treatment of every individual breeder, egg and chick is the key.”

Egg age was one basic area where many farms suffered from a breakdown in their basic processes, said Dr Thorp. Too often procedures weren’t followed, eggs were missed or became stuck in nest boxes, so delaying their movement into storage and finally the hatchery.

“This might affect 2% of your eggs, which will have an impact on egg uniformity. This will in turn affect 2% of the chicks and this is especially important with broilers, because you’ve got to have them bang on target weight at 32 days.”

Dr Thorp said it was possible to compensate for difference in egg age, but the only way to do this was to alter the setting time in the hatchery. “Even if the night shift at the factory has to put those eggs in at 2am compared to the others that went in at 9pm the evening before, there is no other way to do it.”

On-farm storage before moving eggs into the hatchery was also important, with each day following collection adding approximately one hour to incubation time, leading to variations in hatching time.

Obviously ensuring eggs are clean when producing for hatching is also important and Dr Throp suggested a ruthless approach in selection to ensure results never disappoint.

“A clean egg is one that’s never been dirty. If you brush them up on the surface you just push crud into the pores of the egg,” he said. “My preference is that eggs which are dirty are not washed, but discarded.

“The critical thing for me is that the chemical in the cleaning water ceases to become effective in the presence of organic matter. Eggs are being washed in a ‘bacterial soup’ and all you are doing is cross-contaminating them. The only eggs that can be washed are those which are a little dirty because once the chemical is used up it’s a disaster.”

It was suggested that eggs with low levels of contamination were placed at the bottom of the setter, rather than washed.

Through the entire process – from collection to grading, to storage and into the hatchery – it was vital eggs were kept at a fairly constant temperature.

Placing temperature gauges and data loggers at every point in the production process was suggested as a good way of collecting data to work out areas where processes could be improved.

Dr Thorp said attention to the little things during the process could pay off in the long run.

“When you are auditing the system, look at simple things. If the trollies lean against the wall, you are restricting air movement so it’s more difficult to maintain a constant temperature,” he said.

Once hatched, chicks needed to be removed from the incubator at the point when one in 20 birds were still wet, with the rest dried. If chicks were removed too early, they wouldn’t be ready for the stresses of movement. But if they were removed too late, they would be exposed to high levels of bacteria.

“If all the chicks are dry, the eggs are dry and there is lots of merconium on the shells, then they’ve been out too long. If you pick up the eggs and crunch them in your hand they aren’t that crunchy, there is a bit of moisture in them.”

To achieve a reduction in variability in chicks coming from the hatchery, Mr Thorp said it came down to closely and regularly monitoring the whole production process.

“Accurate and regular monitoring of all stages of the process is vital, combined with walking the process from breeder flock to chick placement and achieveing correct practice.”