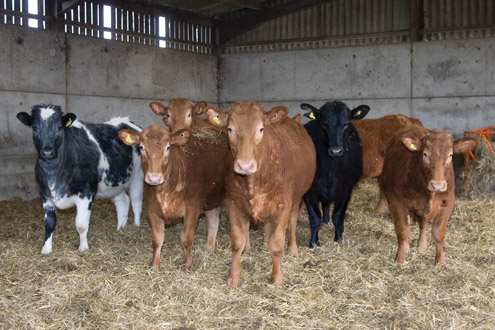 Taking a fresh look at their calf vaccination programme has helped brothers Ian and Michael Cruickshank make a dramatic effect on pneumonia outbreaks on their Scottish beef farm.

The brothers, who farm 250 Charolais-cross cattle on their 160ha farm in Peterhead, Aberdeenshire, regularly had losses of up to 6% of their youngstock thanks to the disease.

“Every winter’s day we’d be worrying which animals would be dead the next day,” says Ian Cruickshank. “We were treating pneumonia and losing animals regularly.”

The Cruickshank’s system involves buying 170 store cattle from local markets between February and April each year to finish at 340-360kg deadweight, normally within six to eight months of arrival.

In October, they also buy a batch of 80 six-month-old weaned suckler calves to finish 18 months later.

“It was buying the calves from different farms and then housing them together in one group which was causing the pneumonia outbreaks,” says Mr Cruickshank.

“We knew it had to be this as there was nothing wrong with the sheds or with the ventilation, which is often the culprit.”

Most commonly, pneumonia affects calves when they are weaned and housed for the first time, as it puts them under stress.

“It was having a huge impact on the business,” says Mr Cruickshank. “Not only is it incredibly demoralising to buy healthy cattle and have them come down with illness, but it was really having an impact on our bottom line.

“The vet’s bills for treating them quickly mounts up. Plus if they get pneumonia and survive, their lungs are damaged for the rest of their days and they are always coughing and wheezing.”

The turning point came when they bought a batch of weaned calves that had been already vaccinated against the three main respiratory viruses associated with a pneumonia outbreak – RSV, Pi3 and IBR – and against the immuno-suppressive bovine viral diarrhoea (BVD) virus.

“It made a huge difference, we hardly had any trouble with pneumonia,” says Mr Cruickshank. “It convinced me that vaccination is the most important thing.”

While they always look for vaccinated calves as a first option, if they cannot fulfil their autumn intake from farms that are already vaccinated, the brothers ask suppliers to vaccinate before cattle are moved, or they vaccinate themselves as soon as they arrive on farm.

“We now keep old cattle further away from the youngstock as we found that wasn’t helping with outbreaks, but getting them vaccinated for pneumonia immediately definitely has the biggest impact,” Mr Cruickshank adds. “We haven’t had a dead calf for a few years since we started doing things; it’s really working for us.”