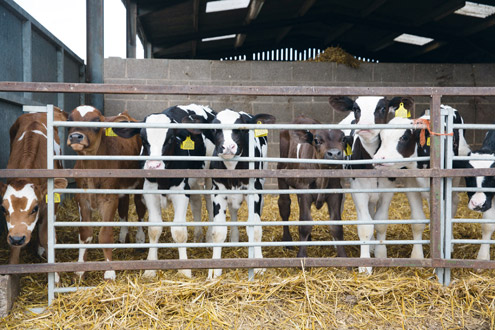 However, new expert advice and research suggests it is possible to effectively manage and control this challenging disease and reduce any long-term effects.

Subclinical coccidiosis can go unnoticed and be overlooked due to the lack of overt symptoms, according to vet Rob Davies from Allen and Partners Veterinary Services, Whitland.

“Coccidiosis, be it clinical or subclinical, will impact growth rates, leading to weaker calves that fail to reach their potential. For dairy heifer calves to develop to their potential and meet the target of calving before the age of two, they need to grow at their optimum growth rate of about 800g a day,” he says.

Ill-thrift and a slowed growth rate is a big problem in calves suffering from coccidiosis. As a result, Mr Davies encourages his clients to regularly weigh calves or use a weigh band.

“This will help identify any significant drop in growth rates that can help with the detective aspect of establishing if and when subclinical coccidiosis is becoming a problem,” he says.

“Farmers should consider routinely weighing calves as they undergo management practices such as weaning, as this is when calves are usually put under a period of ‘stress’ that will temporarily suppress the calves’ immune response. This is the most likely opportunity for coccidiosis to take hold.”

And while clinical coccidiosis symptoms such as scours, straining and obvious weight loss are easier to identify, Mr Davies says if they are left to develop to the clinical stage, calves will struggle to catch up, or in some cases when no treatment is offered, they will die.

However, tests are available to help vets tackle subclinical coccidiosis. “Bayer is working with vets like us to provide coccidiosis testing with speciation, to establish the exact pathogenic species challenging the stock.

“These results then allow us to advise targeted treatment and plan timings according to the management of the calves and the species of coccidia present.

This should be after the calf has ingested the infective oocyst, but before any significant damage or symptoms are seen. This time varies slightly depending on the management of the calves and sometimes the pathogenic species of coccidia challenging these calves.”

Establishing the right time to treat subclinical coccidiosis can lead to long-term gains, as significant gut damage and any subsequent setbacks are prevented from developing.

One group was treated with the active ingredient Toltrazuril at the correct time and saw significantly reduced average age to first service by 24 days in comparison with the non-treated group.

“Overall pregnancy rate, the first service conception rate, and average services per conception, were all improved in the treatment group.”

Mr Davies says effective management of subclinical coccidiosis before overt symptoms develop, and any long-term damage is done, will help dairy heifer calves to meet their growth potential.

“This has the knock-on benefit of not hampering reproductive development, making it possible to target calving at a younger age,” he says.