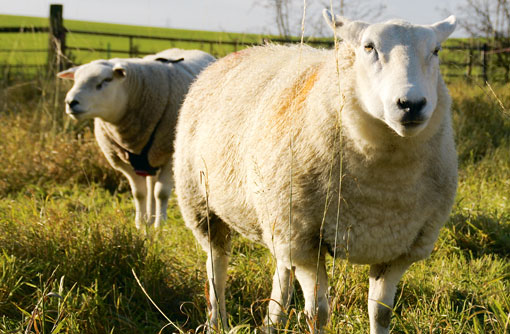 Four out of five UK sheep flocks are infected with toxoplasmosis and at least a third of all flocks are carrying the bacteria that causes enzootic abortion.

But while the management procedures for controlling abortion are straightforward and effective, they are still not being applied by many sheep producers.

Recent results from MSD Animal Health’s FlockCheck found more than 86% of blood samples taken from ewes tested positive for toxoplasmosis and more than 62% were positive for enzootic abortion. About 43% of samples showed exposure to both diseases.

However, while Enzootic Abortion of Ewes (EAE) can cause abortion storms, many farmers may not realise they even have a problem, but there’s no doubt these infections do erode flock profitability.

Toxoplasma infection is contracted purely from cat faeces and demands all cats to be kept away from feed fed to ewes. Vets say just a spoonful of kitten faeces is infected enough to pass toxoplasma to 700 sheep.

Once ewes or hoggs have contracted toxoplasma infection they are immune for the rest of their lives. One control option is to expose them to infection before they go to the tup.

Ewes that abort lambs as a result of enzootic abortion are never free of the infection and pass their infected status on to their female progeny. A strict culling policy is essential, although levels of environmental infection can persist for some time. Any ewe that aborts must be isolated in case the cause of the abortion is EAE. Discharges following lambing and cleansings pose a high risk of infection.

“Anyone buying in a fair number of replacements can expect to bring home infected ewes so be careful what you buy and where you buy from.

“Every sheep brought on to the farm should be vaccinated before it’s mixed with the existing flock – and that’s a policy that should be rigidly adhered to every year,” he says.

All border fencing and boundaries should be checked and made secure to avoid contact with any neighbouring sheep that may pass on infection by straying in.

“Abortion can have a big impact on a flock’s profitability if all precautions aren’t taken to avoid infection.”
Vet Matt Colston

“Abortion can have a big impact on a flock’s profitability if all precautions aren’t taken to avoid infection,” says Mr Colston of Penrith, Cumbria, vet Frame, Swift and Partners.

While sheep sold at auction marts and summer fairs may be offered as having been vaccinated against enzootic abortion and toxoplasma, the purchaser is often given no guarantee. It’s a situation vets believe can put flocks at risk.

“Ewes bought from vendors involved in schemes such as the Highland and Islands Sheep Health Scheme have a guarantee that females are free of enzootic abortion, but if ewes are bought-in from general sales and the buyer has any doubt about the vaccination status of the females, it will do no harm to re-vaccinate.

“A written warranty given by a vendor selling ewes that have been vaccinated is useful – any reluctance to do that may suggest they haven’t been done,” says Mr Colston.

And clearer understanding of the modes of infection leading to abortion will help more sheep producers adopt improved measures of reducing the problem, say vets.

“The biggest problem with enzootic abortion is the fact a ewe may become infected but it’s only once she has aborted her lamb that the problem becomes evident through blood testing,” says Mr Colston.

While he acknowledges there has been progress in reducing the incidence of toxoplasma in flocks that have made a determined effort to do so, there are still many that don’t.

“Controlling enzootic abortion by vaccination is effective, but there are still those trading in sheep who don’t vaccinate ewes and are not tackling this problem as well as they could.”

Buying sheep from flocks that are accredited as being free of enzootic abortion is the safest way of avoiding infection, but if neighbouring flocks are suspect, or enzootic abortion has been previously encountered in your own flock, all “clean” replacements should be vaccinated before they are mixed with any other sheep on the farm.

And although a one-off vaccination was previously considered to provide lifetime cover, manufacturers are now advising that ewes should be vaccinated every third or fourth year to achieve optimum protection – so most ewes would be jabbed twice in their lifetime.

“Setting-up a preventative action plan with your vet well ahead of buying any flock replacements this autumn is the most sensible way to tackle abortion. Enzootic is the biggest abortion threat but other diseases such as Schmallenberg will cause abortion if it hits at the wrong time.”

There is no vaccine for Schmallenberg and infected ewes can abort their lambs. And Mr Colston says farmers in the north need to be vigilant as it’s expected the virus could move northwards.

“The big risk is where ewes are infected for the first time in early pregnancy.

“Ideally it’s better if ewes can be exposed to the virus before they become pregnant to provide them with a degree of immunity – but this isn’t an easy or practical option so the abortion risk remains,” says Mr Colston.

However, despite toxoplasmosis and EAE being among the most commons causes of abortion, there are effective vaccines for both these infections which must be given before the ewes become pregnant and can help prevent any losses.

Research has found when toxoplasmosis is present in your flock, vaccination can produce a 6.4% increase in the number of lambs.

The situation can be more complex with EAE if many ewes are already carriers of the disease. However, most farms will see a significant benefit from vaccination during the following season.

Paul Roger of Veterinary Consultancy Services based in north Yorkshire says it is essential for sheep producers to keep detailed records at lambing time and to make a full and prompt evaluation of the data post-lambing.

“There’s an urgent need to raise awareness about abortion, what causes it and the most effective flock health management needed to avoid it.

“Just one confirmed diagnosis means there are more infectious organisms on the farm – but all too often a full assessment of potential infection and its consequences aren’t undertaken,” says Mr Roger.

“To get on top of abortion it’s absolutely critical not to underestimate what’s really going on.

“It’s essential to dig deep and to use all the data you have available to create a full picture of the health status of the flock.”

Mr Roger says sheep producers considering vaccinating ewes for the first time this season should work closely with their vet and undertake blood sampling as the first stage of the programme.

Keeping detailed records at lambing time and in the weeks afterwards is vital – but that information must be evaluated and acted upon where necessary.

“It’s not just a case of flocks deciding to vaccinate and assuming the job is done.

“There are issues such as how many times a ewe needs to be vaccinated and what may cause her level of protection to be weakened.

“When a vaccinated ewe is challenged by infection, her cover against infection will be more solid.

“If not challenged, her vaccination cover may be weakened and infection can get through.

“These are all issues that need to be discussed with your vet as well as identifying any other of the potential causes of abortion that may have caused lamb losses.”

Vaccinate for the future

If you have experienced high barren rates and/or abortion problems in your flock and have had toxoplasmosis and/or enzootic abortion (EAE) detected, now’s the time to vaccinate your ewes to protect them against future lamb losses. Vaccination is the only practical way to avoid these diseases in future years.

Toxovax will protect the ewe against toxoplasmosis for at least two lambing seasons. The vaccine can be given up until three weeks before tupping.
Enzovax protects the ewe for at least three years and can be given to ewe lambs intended for breeding from five months of age.

Ewes should be vaccinated at least four weeks prior to tupping. Vaccination of ewe lambs intended for breeding and replacement stock is recommended as soon as possible to reduce potential exposure risks from latent carriers in the breeding flock. Toxovax and Enzovax can be used concurrently.