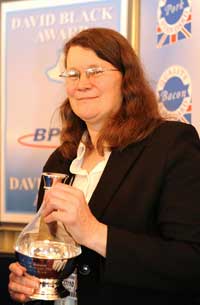 Professor Sandra Edwards has received the David Black Award 2009 for her contribution to the pig industry.

Speaking at the House of Lords this morning (Tuesday 27th October), Stewart Houston, chairman of BPEX said it was thanks to scientists such as Prof Edwards, the industry could make research based decisions.

“A sustainable future for the industry is underpinned by the relevant research which will help us regain our competiveness,” said chairman of the judges, Mick Sloyan, BPEX.

“Prof Edwards has been a leader in research on welfare and it is vital we have scientific input into the welfare debate, rather than emotional reaction.”

“Prof Edward’s work has benefited pig production everywhere and the award marks her long standing contribution to the industry,” he added.

Prof Edwards is the current chairman of agriculture at the University of Newcastle, where her research interests focus on the multidisciplinary interactions between nutrition, reproduction, behaviour and welfare in pigs and other livestock.

From her roots on a small mixed farm in East Anglia, Prof Edwards has worked tirelessly to provide new knowledge that enhances the sustainability of pig production in this country, read the judge’s citation.

Prof Edwards has given her time to serve on a number of committees, including the Farm Animal Welfare Council, the EU Scientific Vet Committee and the European Food Safety Authority.

“I am both surprised and honoured to receive the David Black Award,” said Prof Edwards.

“It has been a real pleasure to work with an industry which has one of the most integrated and constructive sets of people around.

“The way they work together with government, researchers and people outside the industry to achieve common goals is an example to us all.”

However, Prof Edwards said that being the only researcher to win the award this decade highlighted one of her major concerns about the growing divide between industry and academia.

“The number of people in the research community that can see the value of research and apply to practical circumstances is low.”

“When I started there was a distinct career path… I put a plea to the government and industry to re establish the structure for young applied scientists so they can make a worthy contribution to the pig industry,” she said.