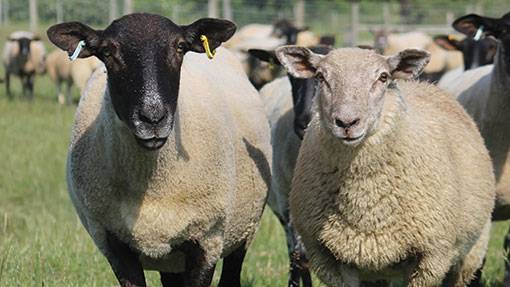 High-quality lambs capable of earning premium prices are giving one recently established Kent flock a head start when it comes to maximising margins.

For Tim Piper’s Wittersham flock of 800 Suffolk cross Mule ewes, the use of growthy, sizeable Beltex tups is producing lambs that regularly achieve top prices when sold live, both locally and further afield.

The flock, managed on a contract basis by Edward and Gemma Lovejoy, along with their shepherd Phil Loveland, was established in the autumn of 2012 as a 400-ewe flock to make use of surplus grass on the mixed arable and livestock unit, which also carries a herd of continental suckler cows.

The decision to start the flock came from a desire to maximise the use of the available grassland and also to help with blackgrass control in the arable rotation, explains Mr Lovejoy (pictured below), who was a Farmers Weekly Young Farmer of the Year Award finalist in 2012.

“Additionally there are some areas of rented grazing on the farm that aren’t suitable for cattle, either due to location or size. A sheep flock fitted the bill perfectly and enabled the farm to maximise output from the available grass.”

“We aim to market the bulk of the lambs by early July, taking advantage of premium prices before larger volumes of lambs come forward.

“Last year was exactly as we’d hoped it would be and the delay in lambs coming forward in other parts of the country helped the flock to achieve some significant premiums, with the overall average for all lambs sold being £95 a head.

“This year has been strong, too, with 36kg lambs sold in the third week of May making £105 apiece. We don’t usually draw lambs that light, preferring to aim for 40kg, but the trade this year was very strong earlier on, so we took the chance to capitalise on it.”

Mr Lovejoy says the type of lamb the flock is producing is much sought after, with the Beltex-sired lambs carrying a decent level of cover at all weights. “They don’t go overfat too easily, which is excellent as it allows us to hold back and draw decent-sized runs of lambs to give buyers plenty to bid on.

“But we’re fairly careful in the type of ewe and ram we’re buying for the flock. To ensure we get good early growth we’re going for larger-framed ewes and rams and it’s paying in terms of getting lambs away early, with the first lambs being drawn at about 10 weeks old.

“We do feed a little creep, but this is only introduced once lambs are about six to eight weeks old to help push them on for the final finish,” he explains.

With all marketing done on a liveweight basis, Mr Piper chooses to sell a number of lambs through the local market at Ashford, with other runs going north to Thirsk to capitalise on the lower numbers of lambs available in the North early in the season.

While sending lambs to market in North Yorkshire may seem a long way, it has paid dividends, adds Mr Piper.

“Last year the lambs we sent there were earning premiums of £10-12 a head more than we were getting locally. We send prime cattle to Thirsk, too, and the lambs helped make up the load in the lorry, so it worked well from both points of view.”

Management of the flock is entirely in the hands of Mr Lovejoy, with ewes lambed inside in February and then turned out to grass within a few days of lambing. “Once ewes are turned out we don’t feed them, having shut up grass for them over the winter to ensure a decent bite when they’ve lambed.

“The Beltex-cross lambs have plenty of vigour and a good fleece cover, so cope well once they’re turned out. Their mothers are decent, milky ewes capable of rearing good lambs off grass.”

“The last of the lambs are weaned at the end of July, with fewer than 100 left to finish at that point, and those sold prior to that incurring low vet and med costs.”

The contract shepherding arrangement works well from both sides, with Mr Piper able to call on skilled labour to manage the flock. He is also able to spread his workload and capital investment across increased numbers.

“We charge a fixed fee a ewe a year for our time and management input, so everyone knows where they stand and we know exactly what we’re earning from the arrangement, says Mr Piper. “This helps with budgeting and cashflow for both businesses and gives us all a reason to make sure the flock performs well.

“A flock of this size wouldn’t justify a full-time shepherd, but I wanted someone dedicated to the flock to ensure it was well managed. Edward’s input has been invaluable in establishing and running the flock from the start.”