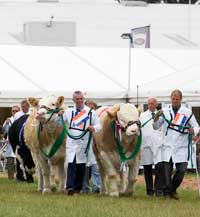 Plans for a national livestock event in 2011 to replace the Royal Show’s livestock competitions have been put on hold, a meeting of RASE‘s Stoneleigh Park tenants was told last Thursday.

After the last Royal Show in 2009, RASE originally announced its intention to hold a livestock show in 2011, following a break year this year to allow it to re-group and set firm plans in place for the event.

However, at a meeting with the site’s tenants last Thursday RASE chief executive, Brian Warren, said such an event would not happen in 2011, but very early plans were being considered to organise such an event at a future date.