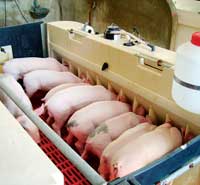 Competition at the udder often puts weaker pigs under increasing pressure leading to failures at the first stage.

But for a Yorkshire farmer, keen to raise as many pigs as possible, investment in several Nurtinger units has seen a drop in pre-weaning mortality by 5%.

Mr Coates saw the system being used in France eight years ago and its success stuck with him. “At the time when I saw the unit, we weren’t getting the number of pigs born, but I stored it in the back of my mind and now we are using it successfully,” he says.

The Nurtinger system at Court House Farm is used by removing the strongest four or five litters from the sows at seven days old and artificially rearing them in the Nurtinger pens in groups of 12. Smaller disadvantaged piglets from the remaining litres are then grouped and fostered on to these sows.

“This gives the weaker piglets a better opportunity and also releases the pressure on sows, as they are only rearing between 9.4 and 9.6 piglets, which also helps maintain a high farrowing rate,” he says.

Pre-weaning mortality has also reduced by 5% and piglets weaned a litter stands at 11.4. “These figures alone mean it is cost effective. Although we paid about £2400 for the last unit we bought, increasing the number of pigs born alive makes it pay.”

From investing in one Nurtinger system three ago, Mr Coates now has 14 on the farm, but says he was lucky with the spare room they had available. “We had a spare building next to the farrowing unit where the units fit perfectly. If the room wasn’t available, it would have cost a lot more in installing them,” he admits.

The Nurtinger pens contain an enclosed lying area, a fully slatted dunging area and a feed area. Piglets are initially fed a milk replacer which is automatically dispensed every hour and after six days in the pen the amount of solid feed is gradually increased to eventually replace the milk.

These piglets at 26 days then join the mainstream weaners. “Although you don’t get quite the quality of pigs from the Nurtinger with weights averaging about 6kg compared to 7.5kg from those reared by the sow, they do make it up in the first few weeks after weaning. Artificially reared piglets don’t suffer from a post-weaning check like the others do,” says Mr Coates.

Although he would recommend this system to farmers rearing high litter sizes, labour is something that needs considering. “You need a level of commitment from your staff to make this system work. Looking after the unit takes about five hours a week, but it is worth it.”