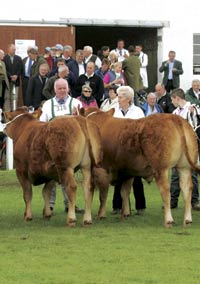 Record livestock entries look set to make this year’s Great Yorkshire Show the largest show of stock in England this year, with about 1800 sheep entered for the Farmers Weekly-sponsored sheep section and a waiting list in place for cattle exhibitors hoping to gain last-minute entries.

Topping the list of sheep breeds for numbers is the Texel breed, with more than 270 entries for judge Robert Laird, Biggar, to sort through to find his breed champion that will go forward to the interbreed championship under a panel of judges.

And it is another Continental terminal sire breed who has attracted the second highest number of entries, with Beltex numbers standing at 128, a record for the breed at Harrogate. The task of selecting the champion from this breed has been handed to another Biggar-based breeder, this time Mary Dunlop, whose son Michael picked up last year’s Royal Highland Winter Fair championship with Beltex-sired lambs.

A total of 126 Charollais entries have been made for the show, with Worcestershire-based Geoff Probert taking on the challenge of selecting the champion with a view to the breed repeating its success in clinching last year’s Great Yorkshire interbreed title.

Topping the numbers among the native breeds, are the Shetland breeders, with the breed putting out 97 sheep for Maurice Wakeling to sort through. Second best of the native breeds are the Suffolks, who this year will be placed by one of the region’s foremost exponents of the breed, Richard Bulmer, Great Habton, Malton. Having been a long-term exhibitor of the breed at the Great Yorkshire, Mr Bulmer will this year be charged with picking the best of the sheep put forward by his fellow breeders.

With many exhibitors on waiting lists for cattle entries, honorary show director Bill Cowling is conscious the show needs to start planning for next year’s event to ensure extra cattle accommodation can be provided. “Having more entries than we can cope with is a strong position to be in and, as some drop out, some of those on the waiting list will be able to come. But it is not a situation we want to reoccur next year. We need to find a way of accommodating as many of those who want to come to the show as possible.”

But, Mr Cowling is ruling out any grand plan to demolish and redevelop the existing cattle accommodation. “That’s not on the agenda. We need to look at whether the current buildings can be adapted to accommodate more stock or what arrangements can be made to house the overspill we have. It may be that some cattle are stalled in marquees in future or we may erect additional permanent buildings.

“However, current and potential exhibitors can rest assured we are doing all we can to increase cattle accommodation for next year’s show. This is important as I believe more people will want to show at Harrogate next year rather than a shorter event at Stoneleigh.”

And, like the sheep judges, there is a raft of high-quality names among the cattle judges, none less so than Ian Callion of Stirling, Scotland, who has been called south of the border to place the entries in the interbreed group competition on the second day of the show. Mr Callion will also have the honour of adjudicating in the junior interbreed championship.

As ever at the Great Yorkshire, the individual interbreed award will be decided by a panel of judges, each of whom would have judged their own breed section at the show. Among that illustrious panel will be: Northern Irish breeder Brian McAllister, who will take charge of the Charolais classes; Alasdair Houston, who will place the Simmental entries; Angela Robertson, who will be in charge of finding a champion from the Aberdeen Angus lines; and Frenchman Yves Rougier, who will travel from Le Monteil, in the Limousin region of central France.

In the dairy lines, the Jerseys will come under the scrutiny of Hertfordshire-based leading breeder Barry Daw, with Gilmour Lawrie taking on the Ayrshire classes. Interbreed judging honours among the dairy cattle will fall to just one man and this year it will be Essex-based Pete Prior, who has the enviable job of picking an overall winner from the four breeds on display.

Placing the interbreed championship in the pigs will fall to Northern Irish pig breeding supremo Robert Overend, a long-time pedigree breeder and pig AI centre owner from Magherafelt. And the final of the prestigious BPA Pig of the Year competition will be placed by one the pedigree pig world’s most famous faces, Dorset-based Steve Loveless.