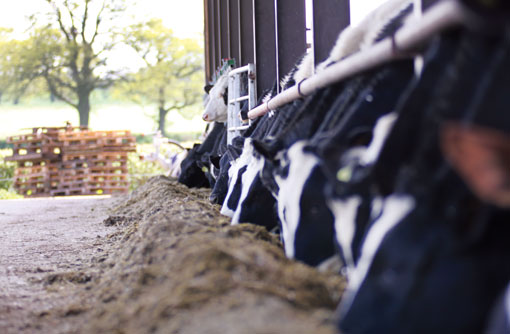 Sufficient feed space and a lack of social stress for dry cows are proven factors in a successful transition period for high-yielding US herds. But the complete programme also requires some good old-fashioned stockmanship skills, says vet and DairyCo extension officer Nicky Fair.

Having visited Wisconsin last year on the John Platt Travel Scholarship awarded by the Cheshire Agricultural Society, Miss Fair was able to see how large herds, calving between five and 14 cows every day, managed their transition yards.

“The transition period is the most important stage because it can make or break a whole lactation,” she explains.

“We need to get the foundation (transition) right, otherwise it’s an uphill struggle – we are trying to get the high-yielding cow back in-calf, produce her yields and keep healthy.”

Miss Fair reveals that milk recording data from US herds is now being used to calculate a transition cow index, to put a figure on a successful transition which helps consider which management areas have the biggest effects.

“Surprisingly, diet isn’t the number one factor in making the perfect transition. Despite the interest in far-off, close-up and dietary cation-anion balance diets, as long as a cow has a reasonably standard dry-cow diet and eats enough of it, this isn’t the biggest make-or-break influence. It’s actually trough space,” says Miss Fair.

“Cows are programmed to eat together as a herd and those eating later, eat less. While all cows naturally drop their dry matter intake and go into negative energy balance around calving, if we make this drop worse or it lasts longer, it affects transition and subsequently lactation. This is why US research now recommends 75cm (30”) feed space for every dry cow.”

The second biggest factor affecting a cow’s transition to lactation is social stress. Each time a cow changes groups, she has to work out her surroundings, find out who is in the group and, most importantly, identify who is boss.

Social turmoil occurs, involving a lot of staring, as a cow works out her new pecking order: “And she isn’t eating when she does this,” she adds.

“Ideally, a group of cows should be dried off together and taken all the way through to calving in the same socially-stable group. However, in many herds this would require too many pens, so it is impractical on a lot of farms. Instead, an alternative solution is to move cows into the calving group just once a week.

“This means just one day of staring and sorting out social status, before they settle down to six days of eating.”

Another stress buster is to operate just-in-time calving. However, a herd has to be large enough to justify 24-hour staffing and have the correct infrastructure, points out Miss Fair.

The aim is to move a cow into a separate calving pen just at the point of calving, when the feet and nose are sticking out and the cow has reached the point of no return and will calve within half an hour.

Move her too soon – when the water bag is showing – and her fight or flight response kicks in. Nature then delays calving for safety reasons.

“The result is an assisted calving, a higher calf mortality rate because the calf takes longer to be born, and the knock-on effects could be whites affecting her fertility, plus a prolonged negative energy balance,” she explains.

“Cows like a bit of seclusion, not isolation at calving. American herds house their dry cows in cubicles constructed with the rear visible from the feed passageway. This allows staff to inspect every cow laid down, without having to disturb the group.

“Barns are laid out, so that it’s possible to get just one cow up and walk her no more than five metres (5m) to a small, gated calving pen, where she can see, hear and smell her herdmates and calve in a clean environment.”

The final must-have to set a cow up for a good lactation is stockmanship – particularly around calving. Yet Miss Fair believes it’s often forgotten in today’s hard-pressed routines.

“We need to put a value on people’s stockmanship and it doesn’t have to involve taking lots of temperatures. Simply offering a bucket of warm water and a barrow of food, giving the cow TLC and making sure she can get up and down OK. Far better to pick up early on that she’s off colour, than wait until her milk yield has dropped off.”