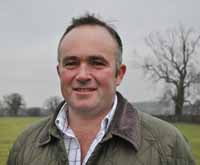 After another wet winter left standing water in the fields at Fields Farm, Leicester, the liver fluke challenge reached levels which proved fatal for some in-lamb ewes last year – despite being drenched against the disease.

Determined not to see a repeat this year, David Saunders and his son Jim have tackled the problem at its root cause, quite literally. They have reduced the disease pressure by sward-lifting to remove ground compaction. This has improved drainage, made fields much drier, and there’s been no sign of liver fluke.

Philip Larkin of Market Bosworth Farm Sales explains: “Unless animals have been brought on to the farm from areas where prevalence of the parasite is high, liver fluke is not usually considered a major problem here in the midlands. Routine preventative treatment with a flukicide is normally sufficient to prevent any problems.

“However, another factor which does increase fluke challenge is the weather. Recent wet winters and summers have meant there is periodically more lying water in fields and this encourages mud snail populations. This snail is an essential link in the life cycle of the liver fluke parasite, as it plays host to the fluke’s spores which then are released into the sward from which they get ingested by sheep.”

Fields Farm is on low-lying clay-based land. In winter it becomes wet, and stays wet into the spring. So as a precaution against liver fluke disease, sheep always receive an autumn drench with a combination anthelmintic and flukicide product.

In the February of last year, with waterlogged pasture, the disease challenge from fluke became very high and 15 in-lamb ewes succumbed to the disease and died, in just two days.

Keen to tackle the problem, David and Jim have set about improving field drainage. David explains: “The wettest three fields had never been ploughed in memory, and we suspected compaction was the key problem. During a visit to the Grassland event last year, we saw the Opico Sward-Lifter in action and realised this was the solution.”

Opico’s Nick Rider visited Fields Farm and showed the Saunders how to determine the depth of the compaction by digging up a clod of earth and examining for fissures. “This is predominantly grazing land, so compaction has been created by cattle and sheep rather than machinery. The subsoiler legs needed to be set 10in deep to get below the pan,” Mr Rider explains.

Jim Saunders sward-lifted the wettest fields at the end of September last year. Conditions were dry enough that the ground cracked in-between the subsoiler legs. Individual rollers which followed the legs then pressed the sward back down again.

This spring there has been no lying water on the subsoiled land, and the ground is much drier. David says: “Not only does the grass look longer and darker, but normally you wouldn’t be able to get across it in February on a quad bike, whereas this year we’ve been able to drive the Discovery over it.”

At £7,722, the sward lifter has been well worth the investment, he says. “The ewes we lost had been fit and healthy, and were only in their third lambing season. So when you take into account the cost of losing 15 ewes at £100 a head and then 30 lambs at £80 a head plus the vaccination costs, the Sward-Lifter has saved us nearly £2,000 this year.

“It’s also a piece of kit we plan to hire out to local livestock farmers who similarly have compaction and drainage issues – for us, it’s definitely a very useful tool to have.”

This spring, the remaining area of the grassland is to be sward-lifted, and the previously subsoiled areas will receive another pass at 90C to last autumn’s work.

At Fields Farm, the disease pressure must have been very high for so many animals to be affected despite flukicide treatment, says Mr Larkin. “By creating a drier environment, David will have reduced snail numbers and significantly lowered infection pressure. The only other option is to try one of the newer flukicides which are effective against more of the fluke’s life stages.”

Find out more about controlling flukes and worms in our online academy.