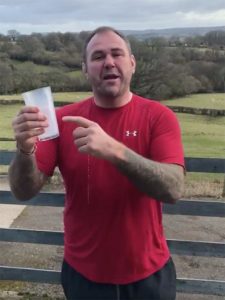 Rugby stars have been downing pints of milk to show their support and appreciation for hard-working British dairy farmers.

The #MilkPintChallenge has been launched as part of the nationwide #Februdairy campaign to back the dairy industry.

The challenge involves participants recording a video of themselves paying homage to dairy farmers, drinking a pint of milk and then nominating someone else.

A number of rugby greats from the Home Nations have already accepted the challenge, posting videos on social media.

Wales rugby star Dan Lydiate as well as former players Scott Quinnell and Rupert Moon have all posted videos on Twitter of themselves necking pints.

The #MilkPintChallenge has gained huge momentum in France, where dozens of farmers and dairy farming supporters have taken part.

Mr Wyn Jones, who farms at Llanfairfechan, in Conway, north Wales, posted his own video on Facebook and Twitter of himself downing a pint of the white stuff in honour of dairy farmers. The videos have been viewed many thousands of times.

He told Farmers Weekly the challenge was a bit of fun, but it also had a serious side.

“There has been so much negativity with some people, so we thought we should do this to highlight the amazing work dairy farmers do to produce the milk that we use in our tea and on our cereals,” he said.

“It has been nice to have some banter and see the positive feedback from these guys. The Welsh rugby team is clearly miles ahead of the other Home Nations on this one. The Scots, the English and the Irish are lagging behind.”