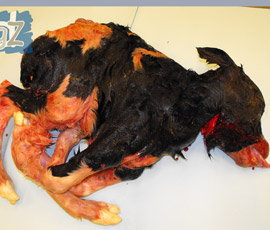 A vaccine to control the Schmallenberg virus is at least two years away, according to the British Veterinary Association.

“We would be starting, roughly, from scratch with the development of a vaccine,” Mr Padgett said.

“It took 18 months to two years to bring the bluetongue vaccine to market.

“The UK was helped by the fact that the disease took many months for the midge to spread the disease from the south of France. We don’t have that extra time with Schmallenberg – it is already here,” Mr Padgett said.

Any treatment for the virus would have to be developed, then field-tested in animals, he explained.

These animals would then have to go through pregnancy before we could assess how effective the treatment was and rule out any side effects, he said. After that the vaccine has to be manufactured and distributed.

“We only achieved the rapid response to bluetongue because there was huge financial support from governments across Europe.

“So the length of time to create a treatment also depends on the level of financial support available from the government,” Mr Padgett said.