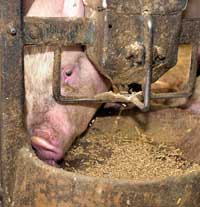 Plans to build a new pig processing plant in Scotland have been hinted at during the annual meeting of marketing co-op, Scottish Pig Producers.

If built, the site could cut haulage costs for producers currently sending pigs to England for slaughter.

The UK’s largest pork producer, Tulip, owned by the Danish Crown Group, is believed to be in negotiation with Paisley meat wholesaler, AP Jess, to lease a mothballed abattoir at Brechin, Angus, to process up to 2,500 pigs a week.

According to SPP managing director, Gordon McKen, Tulip has been approached by a major supermarket group seeking to source Specially Selected Scottish pork, which is endorsed by the Scottish Society for the Prevention of Cruelty Animals (SSPCA) because of the welfare-friendly production systems on Scottish pig farms.

“A new specialist pig plant would enable all pigs produced in Scotland to be slaughtered in Scotland and would have welfare advantages as well as reducing haulage costs,” said Mr McKen. “It would also enable another major retailer to benefit from the Specially Selected Scottish Pork label.”

Neither party has confirmed that a deal is in the offing and A P Jess director, Alan Jess, said he had a number of options open to him.

“I want to do something with the Brechin plant but it is pure speculation that we have done a deal with Tulip,” he said. “We should be able to announce something within two weeks.”

A statement for Tulip claimed the company had no definite plans to acquire additional processing capacity in Scotland.

“We are continuously reviewing our processing and manufacturing capability across the UK,” a spokesman said. “As and when appropriate opportunities arise, we will explore the feasibility of expanding our operations.”

Danish Crown, owned by a co-operative of 15,000 Danish farmers, is Denmark’s fourth largest company and the largest producer of pork in Europe with annual sales of two million tonnes. UK subsidiary, Tulip, operates from 19 sites in England and owns the Danepak, Tulip, Spam, Stagg and Plumrose brands.

SPP handle the marketing of 9,000 pigs a week in Scotland and Northern Ireland. Most of the Scottish pigs are processed at Vion’s Broxburn plant for Asda but the plant also recently started contract slaughtering more than 1,000 pigs a week for Morrisons to take advantage of SSPCA endorsement.