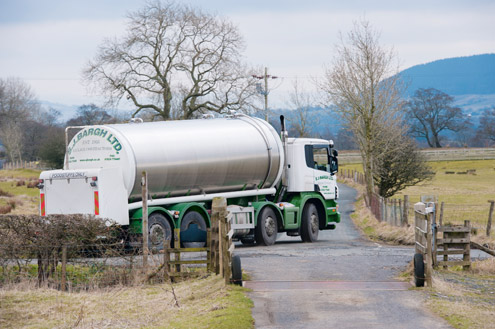 It is almost a year since suppliers of the Lactalis McLelland Group turned their producer committee into an independent body, with the clear aim of building closer ties between farmers and the processor for mutual benefit.

The MSA is financially and democratically independent from Lactalis McLelland Group and aims to ensure a fair deal for farmers by working on a more equal footing with the processor to address farmgate issues, says Rory Christie, who heads the MSA steering committee with five other producers.

The MSA is not a producer organisation, so does not negotiate milk price in the conventionally perceived manner and farmers retain their contracts with the Fresh Milk Company (FMCo), which is part of Lactalis McLelland Group, he explains. “We’re not put together by the processor, so are a truly independent collective voice of all farmer members to whom we are accountable.”

Mr Christie, who also has a 1,100-cow herd on the west coast of Scotland and has been supplying Lactalis McLelland for several years, says MSA membership is voluntary, leaving anyone unhappy with progress free to walk away.

The six MSA board members meet with Lactalis McLelland Group quarterly or more frequently when needed, with feedback to members by post, fax, email or text.

There is a democratic process with an annual general meeting where the steering committee can be re-elected.

“We’re all full-time farmers and part-time representatives, so time is always in short supply. Taking a collaborative approach means we can pool expertise and fund the resources needed to strengthen our position as farmers, while meeting processor needs,” Mr Christie says.

For example, the Scottish Agricultural Organisation Society helped establish the MSA and provided training for the steering committee. The MSA has also been able to share the cost with Lactalis of an independent dairy consultant to give advice on milk pricing mechanisms and market drivers. Recent discussions have focused on meeting the contractual recommendation of the Voluntary Code of Practice and future talks may focus on security of supply and building the relationship.

“It’s all about everyone being more open and transparent. We want to lift the level of professionalism by getting away from the short-term, one-sided decision-making that has dominated the sector for so long. It requires behavioural and cultural change to build trust and make longer-term decisions that meet the needs of the farmer and the processor,” says Mr Christie.

The MSA is funded by a 0.01p/litre charge for all farmer members, although board members are unpaid. “For a 1m litre producer, that equates to £100 a year, which isn’t a great deal when you consider we represent about £60m-worth of milk.”

Lactalis McLelland group managing director Andy Smith reckons this type of collaboration is the future. “It is certainly our preferred way of working, as we can talk directly with a well-organised and professional group of suppliers, rather than many individuals.

“With the changes in the marketplace over the next two or three years – such as the end of quotas in 2015 – this is a great way of making sure we’re all aware of the implications for both sides [farmers and processors] and can plan a way through it together.”

NFU Scotland milk policy manager George Jamieson says membership associations or producer organisations are vital for building trust in the supply chain and developing markets. “It’s not just about getting leverage on milk price. If we’re going to access more global markets in the future, the supply chain must work together and the answer to that is more trust and transparency.”