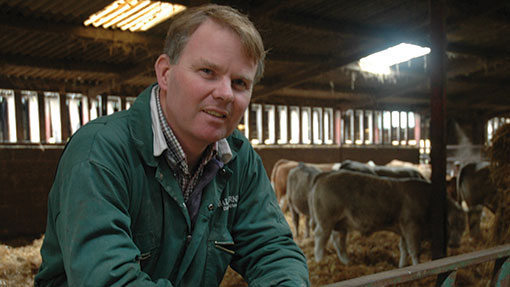 One Scottish farm has taken a new approach to their breeding policy to maximise output. Rhian Price reports

At Balbirnie Home Farms, Cupar, Fife, huge steps are being taken to maximise the profitability of the spring-calving suckler herd.

Since taking over as farm manager at the 1,500ha estate three years ago, David Aglen, alongside herdsman David Douglas, has transformed management strategies in an attempt to maximise output.

“Our only source of income [from the beef enterprise] is the fat animals we sell,” explains Mr Aglen. Therefore his aim is to produce better-quality cattle at a lower cost.

Overhauling breeding policy has been fundamental to this strategy. Previously there was a dairy herd on the estate and therefore the herd comprised largely Limousin, Hereford and Aberdeen Angus cross dairy cows.

“They tended to lose condition very quickly after calving and it was an awful lot of effort to get them back in calf. They were at the tail end [of fertility] so we were putting less fertile cows into the beef herd and the barren rates were quite dramatic,” explains Mr Aglen.

Not only was this having a direct effect on feed costs, they also needed housing for longer periods of the year in attempt to lift body condition scores.

As a result Mr Douglas and Mr Aglen decided to opt for a “hardier, beefy” cow and the herd now consists of 200 Simmental cross and purebred cows, as well as 60 maiden heifers.

Replacements are sourced from two well-known and trusted herds, where the management is easy care.

Health status is also paramount and they source stock from BVD-free herds to maintain the herd’s two-year BVD-free status.

Mr Aglen adds: “We also test for Johne’s annually. Any infected cows due in calf are separated out from the main herd to calve down until the calves are weaned. These cows won’t go to the bull again and their calves will be finished, even if they’re heifers.”

The herd is now three-quarter pure or crossbred Simmental and this has been achieved through a “no passengers” cull policy.

“Cows get one chance [to get in calf that year] because experience shows us they don’t tend to hold the following year and then, by that stage, you have a very expensive animal.

“This year we’ve culled 27 barren cows and 12 others for either bad temperament or bad locomotion.”

Consequently, fertility has improved drastically, which has led to the calving period being tightened.

“Calving used to go on for months and months, it was almost an all-year round affair.”

However, he says in the past three years the calving period has been tightened significantly, from 16 weeks in 2011 to 12 weeks in 2012. Now females calve over an 11-week period, with cows starting on 12 March and heifers on 26 February.

Charolais are the terminal sires of choice and they use bulls within the breed’s top 10% for eye muscle area and retail beef yield EBVs, which helps them produce cattle to market specification and target higher retail values.

“There’s a 2p/kg deadweight drop from one class to another and a conformation grade is 5p difference, so it’s a lot of money on a carcass weighing 360kg,” Mr Aglen explains.

Calving ease and growth EBVs are also prerequisites. “We go through the catalogue before the sale. I personally start with calving ease – that’s my number one selection criterion. The stockman and I will then have a list when we go to the sale and we start the selection process.”

“EBVs are not the be all and end all. They are another tool within our toolbox.

“You can find a bull looks fantastic on paper but doesn’t work very well or he might be a short, dumpy animal,” he explains.

For this reason Mr Aglen believes visual appraisal remains an integral part of the selection process. He looks for a bull that has a long back, with good feet and locomotion. As well as this, he says it is “nice to find one that’s not overfed”.

“They look lovely at the sales but then you bring them home and they disappear. The flesh falls off them. Hence why we try and buy our bulls early in the season, around six to eight months before we need them, because we have time to get them fit for purpose and it gives them time to adjust to the ration.”

“The management of the cows in the lead up to calving can overcome calving issues. We manage our cows so their condition score is where we want it at calving.”

Mr Aglen says they aim for condition score three and let this drop no more than a quarter of a point at calving.

Cows are calved in the spring for ease of management so that labour can be directed towards the arable enterprise during the busy autumn months.

Management of the cows is kept simple to reduce overheads and they are kept outdoors for as long as possible on light, sandy soils. They then calve indoors before being turned out to grass.

The majority of progeny is taken through to finishing, while a select few have more recently been kept back as replacements in an attempt to improve cashflow.

Calves are fed the same barley-based ration through to finishing. This consists of molasses, minerals, maize dark grains, sugar beat pulp and rape seed meal, at 15% protein, 12.6% ME and 84% DM. They start receiving creep between 1kg and 2kg a day and this gradually increases to ad-lib five to six months before finishing.

At weaning in October they are housed in straw courts where silage is offered alongside concentrate, but once this is taken up to ad-lib, straw is provided to increase the fibre in the diet and prevent acidosis.

All calves are vaccinated for pneumonia and wormed at housing and have their backs and heads clipped out to prevent sweating.

Calves are weighed at weaning and then again in January, but this is stepped up to monthly growth checks approximately six months before finishing.

The 2012 crop of steers recorded deadweights of 360kg at 14-months-old, while heifers finished at 330kg at the same age, and 50% graded within the 4L bracket.

“Carcass weights are roughly where we want them to be,” says Mr Aglen.

He says their target classification is U, but he says they have no targets for daily liveweight and carcass gains for future batches. Instead he believes is it better to strive to do the best of your ability.

“If you set a target and you get there you might be inclined to rest on your laurels,” he explains.

They are currently expanding the herd as far as labour and land will sustainably allow.

“We are not able to reduce our fixed costs, but we are able to deal with more cattle without increasing [costs]. One of my main aims since coming here is to maximise the use of what assets we have.

“I am in the lucky position of having land that is not being used to its full potential. This gives us room for improvement.”

“David [Douglas] is an ex-dairyman and his attention to detail is second to none. Our cattle would not do what they do without him.

“We want to keep our attention to detail sharp. We have taken on another member of staff to help with the cattle, because we feel it is too much for one man,” says Mr Aglen.

He believes there is no one rule fits all when it comes to beef farming.

“Work out what you are good at and what your farm is suited to and concentrate on that. Focus on attention to detail – that is where the margins now lie – and keep it simple.”