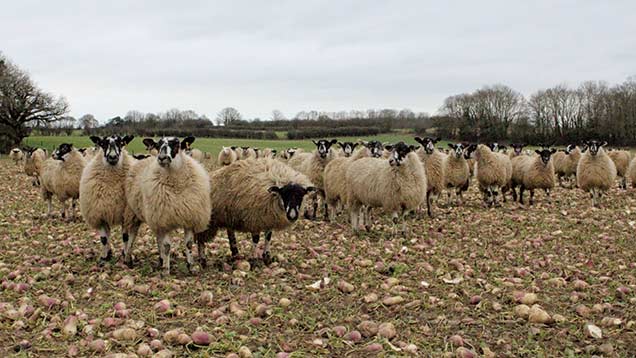 Sheep and arable producers have the potential to benefit each other by embracing a collaborative agreement where sheep are outwintered on arable land.

With land availability often a hindrance for both new and existing sheep farmers, and arable producers struggling to maintain soil organic matter, working together could prove the perfect solution.

See also: Take on a trainee to boost your business

Sheep farmer, Andrew Foulds has long recognised the benefits of a collaborative approach. Mr Foulds buys several thousand store lambs a year and takes them through to finish, with most sold to Randall Parker for Sainsbury’s.

With little land of his own, Mr Foulds admits he couldn’t have grown the business to such a level without working with arable producers. Overall he has arrangements with 12 East Anglian arable farms who grow stubble turnips for him and take store lambs over winter.

“I’ve been working with arable farmers for about 30 years. The turnips are vital to the system as I couldn’t do the volume of sheep I need without them,” Mr Foulds explains.

Agree a date when sheep have to be off the land

GW Harrold and Partners, in Melton Constable, has fully embraced the concept of incorporating stubble turnips for sheep grazing into the crop rotation.

The estate runs 1,821ha of arable land and grows feed wheat, malting barley, sugar beet, potatoes and parsnips. The turnips are planted as part of the rotation before spring crops such as sugar beet or peas.

For farm manager Bruce Lockhart, bringing sheep on to the farm is an extension of several muck-for-straw arrangements he has with livestock producers in the area. Both strategies are part of a drive to increase soil organic matter and reduce bought-in fertiliser.

“About five years ago, Andrew gave me a call asking if we would grow turnips and take sheep for him,” explains Mr Lockhart. “I already had a similar arrangement with a local shepherd growing 40-80ha of turnips a year, which worked well on our lighter land as it gave it a much-needed dose of muck.”

Over the years, turnip acreage and number of lambs taken from Mr Foulds has increased. Mr Lockhart now grows 200ha/year and takes 4,000 lambs plus another 1,000 from his neighbour.

Mr Lockhart believes the added organic matter from grazing sheep on turnips results in a significant yield increase in the following crop with one split-field trial resulting in 0.9t/ha more yield in the following spring barley crop.

As part of the gentleman’s agreement between the pair, Mr Foulds provides Mr Lockhart with the turnip seed, with the arable team responsible for crop establishment.

Land identified by Mr Lockhart for growing turnips is cultivated with a 6m terradisc and broadcast seeder after cereal harvest in July/August. Nitrogen is applied post-emergence and any volunteer barley sprayed off.

Turnips may be sprayed for flea beetle when necessary, with the crop generally ready for grazing from November.

Mr Lockhart is paid a weekly headage rate from November to March, which increases month on month.

Mr Foulds has the same agreement with all arable producers and believes it takes into account the fact that quality sheep keep comes at a premium as the season progresses.

It also incentivises the arable producers to grow a good, high yielding crop through the season.

“The bigger the crop, the longer the lambs are there and the better yields means we can increase stocking rates,” says Mr Foulds, who also pays a £10/acre bonus to farmers who plough land prior to establishing turnips. This helps plough under any residual herbicide.

Mr Lockhart says the cost of drilling and what he is paid equals out, with the main gain achieved through the hidden benefits of the sheep muck.

Mr Fould’s team are responsible for putting up electric fences and managing the lambs. “We talk to Bruce to establish which fields need grazing first. We generally move lambs in batches of 500 and graze at 10 lambs an acre,” says Mr Foulds.

Lambs are generally provided with two weeks’ worth of feed at a time with big fields split accordingly. Strip-grazing is avoided to ensure lambs are never hungry and to reduce labour.

The four shepherds working with the store lambs use a fencing system with three reels on the back of a quad bike, which allows fencing to be put up and taken down at a rate of more than 1,000m/hour.

This speed is crucial considering they could be moving three miles of fencing a day across the region.

After finishing a field, lambs will be taken to a sorting centre. About 60% will be ready for slaughter, with a proportion not quite ready fed on concentrates and fodder beet. Those a long way off will be wormed and put back on turnips.

Mr Lockhart says one of the most important parts of the turnip arrangement is to ensure there is an agreed date when sheep have to be off the farm.

“It will depend on what we’re planting afterwards, but if we’re drilling potatoes or sugar beet after the turnips, for example, we need lambs off at the end of February so we can apply muck and drill,” comments Mr Lockhar.

Mr Foulds says good shepherding skills are crucial to ensure agreed dates are met. “You must work to the arable program. If they need you out by the end of February, you need enough sheep on the field to graze it down and if it doesn’t go to plan you need to bring more sheep in.”

Arrangements between arable and sheep producers could provide a valuable step on the sheep farming ladder for young people looking to get into the industry.

One of the biggest barriers to new entrants is access to land so these sorts of arrangement will be very important and I think agreements between arable and sheep farmers will grow and become more relevant.

For young people looking to form a collaborative arrangement, the key is not to be afraid to knock on people’s doors. Get out there and meet established farmers, get yourself known and come across as enthusiastic and energetic. Invest in building trust as it’s a lot about relationship-building.