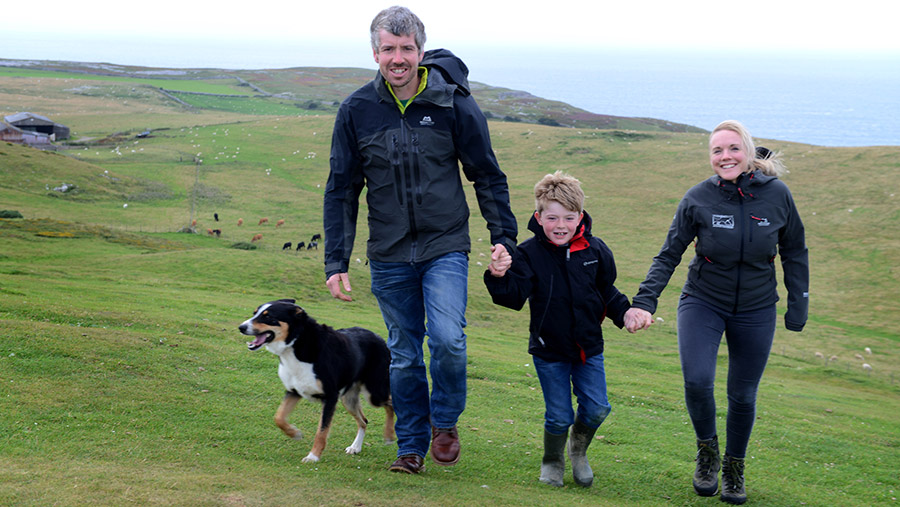 A National Trust tenant farmer who walked free from court an innocent man after prosecutors alleging livestock movement rule breaches dropped the case says support from the farming community and his landlord has helped him through a “very dark place”.

The case against Dan Jones drew national attention because of his high-profile tenancy – three years ago he was awarded the tenancy of the National Trust’s farm on the Great Orme in north Wales for just £1 rent a year.

But the media spotlight shifted when Conwy County Borough Council’s trading standards department prosecuted him, claiming he had failed to dispose of sheep carcasses on 59ha Parc Farm and had failed to comply with movement regulations.

In an exclusive interview with Farmers Weekly after prosecutors halted the trial at Llandudno courthouse, Mr Jones said clearing his name had brought him relief from the most stressful chapter in his life.

“It put me in a very dark place at times – I was facing 20 charges, massive legal bills and looking at a maximum of 10 years in jail if I was found guilty,” he said.

“I deal with the public so much due to the role I have here, so it was really important to me that I cleared my name.”

Mr Jones said he was relieved he had done so. “I only had one choice and that was to fight it to the end,” he added.

His relief is clouded by anger about his treatment by trading standards officers.

They accused him of failing to dispose of three sheep carcasses, failing to keep a register of animal movements and nine counts of failing to notify the authorities of animals he had between 2016 and 2018 – all charges he denied.

He said he was prosecuted with no warning. “I had never had any dealings with trading standards – never even had a visit from them, let alone a warning or guidance,” he added.

“Their policy is to first of all help and advise when something is wrong, but I wasn’t given that opportunity.”

Mr Jones described how the support of the farming community had carried him through a very difficult few months.

“I have had so much support from farmers throughout the whole process. There was real fear among farmers that if they found me guilty, it would open the floodgates to many other prosecutions,” he said.

“The Farmers’ Union of Wales – in particular, my county executive officer, Gwynedd Watkin – have been absolutely fantastic and helped me on a professional and personal level.”

His landlord, the National Trust, had never lost faith in him, he said.

“I do work alongside the National Trust, but I am not an employee, all I am is a tenant, but they have shown faith in me throughout.”

However, the case has taken its toll on him and his family, admitted Mr Jones, who is married with a 10-year-old son. “We are respectable people who have never been in trouble.”

After enjoying a celebratory glass of champagne with his solicitor, he had a meal with his family and shared drinks with university friends he made while an agriculture student at Aberystwyth.

As he looks to the future, Mr Jones said he now wants to get on with the business of farming.

“I have a 10-year plan in place with the National Trust, this whole experience has made me more determined than ever to follow it through.”

A spokeswoman for Conwy County Borough Council said that as responsibility for enforcement rests with local authorities, it had a duty to investigate in this instance.

“A prosecuting authority is also under a duty to continually review the evidence as a trial proceeds and, in this case, the Council made the appropriate decision to withdraw,’’ she said.

The council would be responding directly to the FUW, she added.

The Farmers’ Union of Wales (FUW) is demanding that Conwy council issues an unreserved apology to Dan Jones and fully compensates him for harm and distress resulting from its decision to take him to court.

The union has written to Iwan Davies, chief executive of Conwy County Borough Council, expressing its “grave concerns” about the motives and methods the authority adopted.

In that letter, shared with Farmers Weekly, the union says there should now be a full investigation and that the council should not only apologise and compensate Mr Jones, but pay his legal costs too.

The financial and mental effects on Mr Jones and his family would be long-lasting, FUW said.

“In addition to such impacts for the Jones family, the approach adopted by the council has brought it into significant disrepute, not only locally, but across the UK, with the case being reported in national newspapers,” the letter states.