Police are reminding dog walkers of their responsibilities following a number of serious sheep worrying incidents in Fife.

Over the past month, four animals have suffered painful and unnecessary deaths in the area, resulting in three farmers being forced to end their own animals’ lives.

Police Scotland released a graphic photo of one sheep that had half its face torn off following a horrific dog attack in the Cults area between Monday 30 April and Tuesday 1 May. 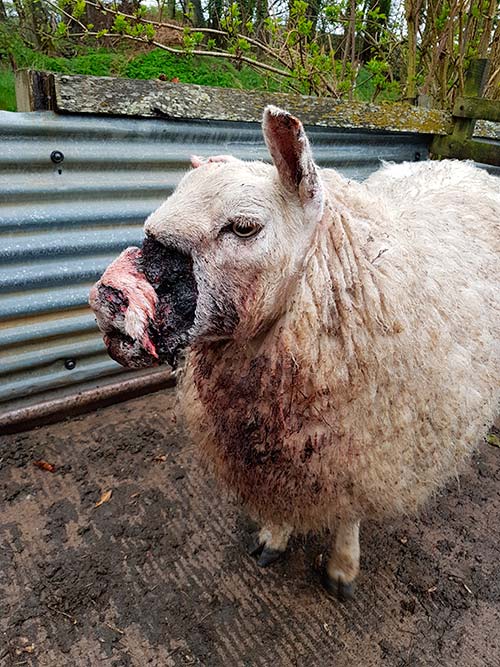 One sheep was found dead and the other had to be put down due to the severity of injuries to its face and head.

On 8 April, in the Falklands area, two ewes and a lamb were attacked by a dog. The lamb suffered severe puncture wounds and a suspected broken back, and had to be put down.

A 35-year-old man has been charged in connection with allowing a dog to be dangerously out of control, and a report has been submitted to the Procurator Fiscal.

On 13 April, in the Glencraig area, a ewe was found seriously injured from a suspected dog attack and had to be put down.

@policescotland report charges made after spate of dog attacks in Fife – Falklands, Glencraig + Cults – saw 5 sheep killed by irresponsible dog ownership. Report livestock worrying to Police on 101, or anonymously to Crimestoppers on 0800 555 111. Dial 999 if crime in progress.

Officers are urging walkers to keep their dogs under control at all times when around livestock.

Insp Jane Combe, of Cupar police station, said: “This is absolutely unacceptable and, as we head towards the better weather, we are taking this opportunity to remind all dog walkers and owners of their responsibilities.

“Dogs attacking, chasing and being in close proximity to sheep can all be considered livestock worrying. A dog nearby can cause sheep to panic and flee, resulting in serious injury or even death.

“All dogs are capable of chasing livestock and they do not understand the impact this can have. However, you do. Avoid fields with livestock when out walking and keep dogs on a short lead where this isn’t possible.”

MSP calls for mandatory leads on dogs around livestock

An MSP has appealed to dog owners to take greater care when walking their pets near livestock.

Kate Forbes, the MSP for Skye, Lochaber and Badenoch, said it was “nothing short of disgraceful” that there were still so many dog attacks on livestock each year.

Ms Forbes spoke out after it emerged that a Highland farmer lost 12 rare-breed sheep, worth more than £12,000, after they were savaged to death by an out-of-control dog.

“I find it staggering that we are still talking about dog worrying and dog attacks on livestock. Owners should know that dogs must be on the lead if passing near sheep,” she said.

“Every year, there are additional warnings issued by the usual bodies and yet we see story after story about sheep being killed and maimed by dogs.

“The results are truly gruesome, particularly when sheep are pregnant or there are lambs.

“Apart from the wretched images of maimed sheep, with half their faces missing, a dog can also cause severe damage by just being in a field with sheep. In particular, it can cause sheep to abort lambs or to be separated from lambs.”