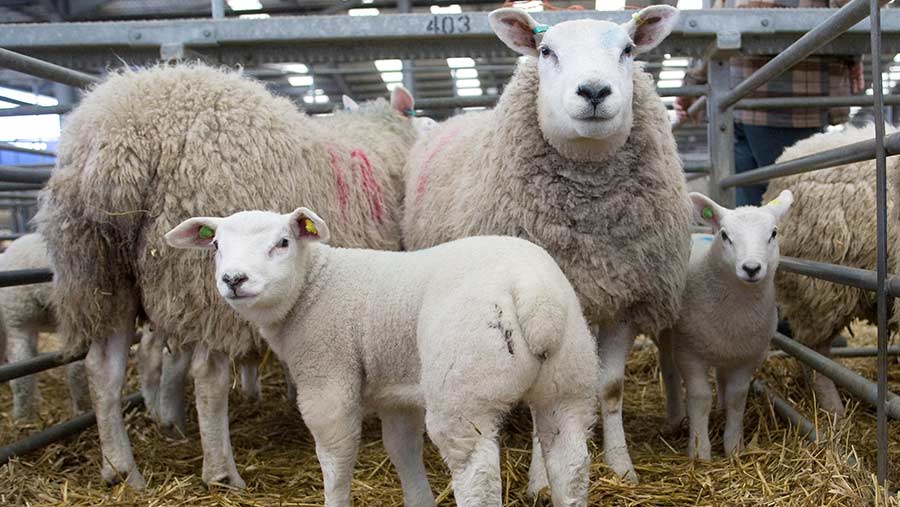 Strengthening demand for ewes with lambs at foot has lifted trade over the past two-to-three weeks at auction marts, allowing prices to reflect record-breaking prime lamb values.

Lack of grass in March and April subdued demand but keen bidding is now being reported as weather improves and farms look to replenish breeding females lost during a terrible lambing.

Trade is up 10% on March levels at Sedgemoor, where Tom Mellor of Greenslade Taylor Hunt is seeing ample demand for 400 outfits a week during the peak sale period.

“Better prices have been seen, they’ve crept up over the past three weeks matching the weather forecasts,” Mr Mellor told Farmers Weekly.

“I don’t think numbers are much of a factor with the trade. We could sell 20% more or possibly 40% more some weeks and I don’t think the trade would drop.”

Prime lamb prices continue to underpin the market, with spring lambs averaging £122 and soaring to a centre-record SQQ of 301p/kg on Saturday (28 April) while hoggs levelled at £123.

A long winter and a tough lambing has stoked demand for ewe and lamb outfits at Longtown as flocks look to replenish numbers after a tough spring.

This has added to confidence in the market from phenomenal prime lamb prices and a recent break in the weather, which improved grass covers.

Trade has firmed over the four sales so far as weather improved and trade is up £5-£10 a life on the year. This is for similar throughputs of 350-400 outfits a week.

“Trade has got dearer and there were one or two more customers looking for ewes and lambs this week on account of the better weather and more grass,” he told Farmers Weekly.

“A fortnight ago there was no grass at all but that hotter weather saw growth take a big jump. It’s not grown as much a people would like – there is still a lot of very wet ground in this area.”

Looking ahead to May, he said averages could lift at the special show and sale of hoggs and lambs on May 8 and May 22, while he also expected more Swaledales, Blackies and Cheviots to come forward as upland farms finish lambing.