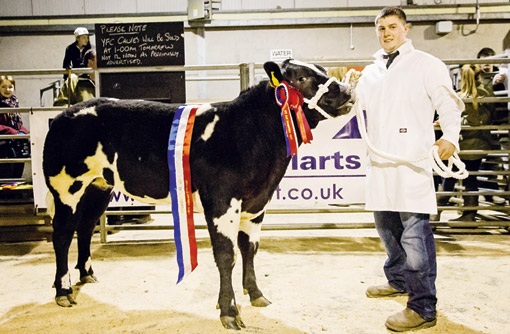 What does it take to select and rear a show winning calf? Jeremy Hunt finds out from this year’s winner of the Hexham Auction Mart calf wintering competition

Making a profit of £550 at his first attempt at buying and selling a suckled calf has certainly given Northumberland young farmer Angus White a taste of profitable beef farming.

But despite making the highest price at a special sale at Hexham Auction Mart – and collecting the championship – the experience of managing and feeding the calf and then selling it four months later has been about far more than simply making money.

Mr White of Steel Hall Farm, Whitley Chapel, near Hexham, was this year’s winner of the calf wintering competition organised by Hexham Auction Mart. Now in its fifth year, the competition was created to give young people the opportunity to learn how to buy a suckled calf at auction in the autumn and sell it four months later – hopefully at a profit.

This year there were 58 calves entered for the sale and it was the British Blue cross Limousin heifer bought in the Hexham ring in October for £750 that finished up taking the championship and realising the top price of £1,500 for Mr White.

The individual purchase price of all the calves entered, which had to be bought at one of five of Hexham Auction Mart’s autumn suckled calf sales, was financed by the mart.

“It was a great opportunity to be able to use your experience to buy a calf and then to manage it and feed it over the next four months,” says Mr White, who works on a neighbouring farm and spends one day a week on his parents’ beef and sheep unit of 650 ewes and 50 sucklers.

“I knew I wanted a British Blue-bred heifer, but it had to be right in terms of conformation and potential. There were some good cattle at the five sales, but in the past I’d admired the calves produced by John Mews of Glendue Farm, Hexham. I noticed a particular calf he had at one of the sales; she was a very smart calf and I could find nothing to match her,” he says.

The seven-month-old heifer hadn’t been clipped out, but Angus was convinced of her potential. “She had plenty of shape and an exceptional topline.”

He says the breeding of the calf was a major part of his decision. “I knew a British Blue would give me the shape to work with, but this calf was a threequarter British Blue, so that was a bonus. She had all the shape and style I wanted.”

The decision on what to feed was made with the help of some experienced advice from the rest of the White family. “It’s the best way to learn how to feed a calf and to understand about nutrition; the aim was steady growth without getting the calf too fat. We had a lot of discussions about protein levels, but in the end we came up with a good ration combining barley, oats and added protein.”

The calf was offered the mix ad-lib throughout the four-month period as well as silage and straw. Mr White clipped out and dressed the calf prior to the show – something he’d never done before, although he had help and guidance from fellow competitor James Mitchell, who has taken the reserve championship twice at this event.

“The ration had to give the calf muscle and fill out the shape rather than pile weight on as though we were trying to finish her. We did keep a close eye on the protein in the feed and when we thought it was putting too much weight on we’d cut it back.”

Rearing costs over the four-month period – covering feed, silage and bedding – were £200 and although the calf wasn’t weighed she was estimated to have gained about 250kg during the rearing period.

“My advice to anyone who wants to buy calves for rearing or for showing is to spend as much time as they can looking at the cattle and talking to the older generation. They have so much experience and this sort of competition is very much about my generation learning from them.”

Auctioneer Chris Armstrong of Hexham Auction Mart reckoned the standard of calves at this year’s competition was the highest it’s ever been. “We had 500 people around the ring for finals of this competition – that’s an indication of how important people feel it is to encourage the next generation of beef producers.

“It was our aim from the start to give these young people an insight into buying and selling stock through the ring and the challenge of making a profit. It’s important for up and coming beef producers to have this experience – and judging by the standards of stock we’re now getting it’s certainly achieving all that we had hoped for.”