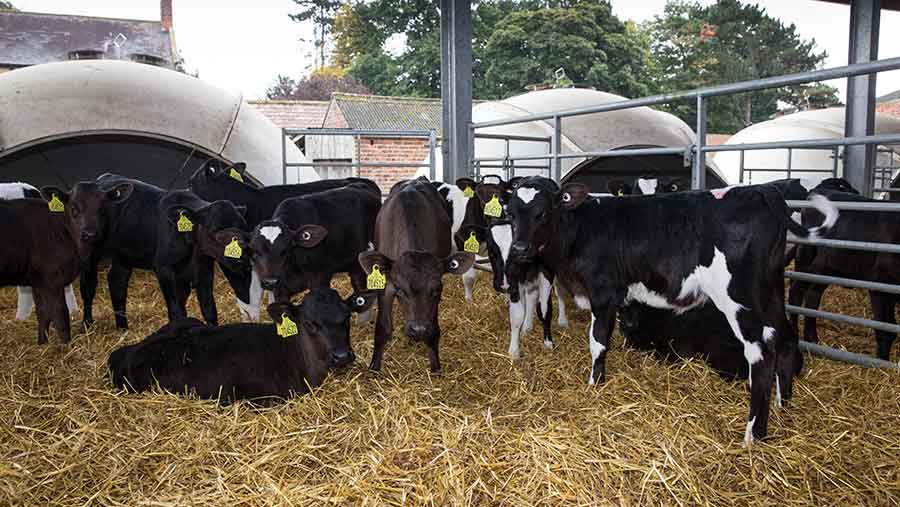 Replacing soya hull with a straw-based pellet in a calf starter ration could help increase daily liveweight gains by about 10%, a study has found.

The trial was carried out on two groups of calves from two weeks of age over a nine-week period at Uphampton Farm, Shobdon, near Leominster.

One batch was offered the usual calf starter nut alongside milk post weaning to nine weeks.

The other group was offered the same nut, but most of the soya hull content was replaced by nutritionally improved straw (NIS).

Emma Roberts, who rears about 700 calves each year at Uphampton Farm alongside her husband Joff, believes the NIS diet has also contributed to better calf health.

“Even our vet has commented on the bloom on the calves fed the NIS-based diet.”

“From three days old, the aim should be to offer a solid feed the calf likes, but which also gets the rumen wall working so the calf can start chewing cud. This then allows the optimum level of starch to be included in the diet to develop the rumen papillae.

“Fibre should ideally be chopped or long straw so that saliva can buffer these acidic rumen contents. However, calves can’t eat enough fibre in this form so, instead, fibre has to be added to the compound feed. This has typically been in the form of soya hulls, but the theory is this is indigestible seed coat rather than stem fibre and can pass through the animal before having the chance to stimulate the rumen sufficiently.”

The study is now going to be repeated using NIS at a slightly higher level and for a longer period of 12 weeks to get a better idea of what happens in the post-weaning phase.

In the meantime, Mr Brown says they are “sufficiently” convinced of the benefits of NIS and have already added it to their mainline calf starter diet and have also introduced two new beef and lamb finishing diets that contain NIS.