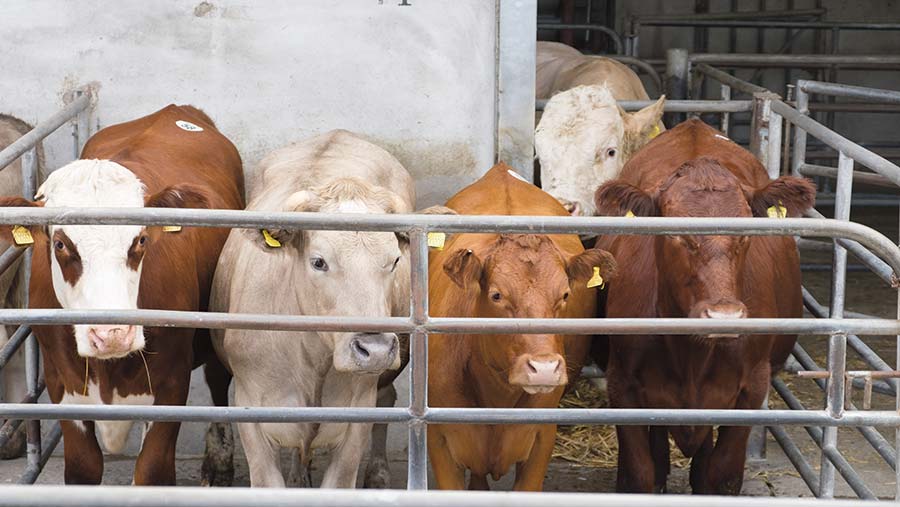 Spring weather has brought forth plentiful grass and renewed buyer confidence in May store cattle sales.

Rather than prices easing slightly as spring progresses, auctioneers have said trade has remained brisk as straw and silage worries faded into late April and May.

This compared well to the March sale, at which 771 cattle levelled at £1,114 for steers and £1,010 for heifers as the sale bucked the trend of recent years, auctioneer Chris Armstrong told Farmers Weekly.

A run of 20 Limousin and Blue-sired steers and 13 heifers (aged nine to 12 months) from Ashley and John Murray, Butsfield, County Durham, averaged £1,189.

“The trend has been over the past eight to 10 years for the May sale prices to be slightly behind the March sales, as vendors often sell their strongest, earliest-born stores in March. But not this year,” said Mr Armstrong.

He said the steady disappearance of suckler herds across the north Pennines was a factor in strong trade, as there were fewer herds selling store cattle.

“We consistently sell about 400-500 suckler cows at dispersals annually and have been for 10 years. Labour and time are some of the main problems,” he said. “This is 500 calves not going through the store ring. Numbers are falling, but it’s difficult to put a figure on how much.”

Solid trade was reported by McCartney’s at Knighton on Friday (4 May), where a showing of some very strong yearling cattle sold to an average of 229.75p/kg and £1,011.63 a head, including some bulling heifers and a pedigree Limousin heifers at £1,700.

She said steers were back slightly, with a lot of younger cattle aged about 12 months.

She added: “Most of the cattle had come out of sheds and we are seeing numbers dropping due to TB. We had 500 at this sale last year and are at 350 now.”

Halls and the Bishops Castle and District Quality Cattle Association commented on the excellent quality cattle on the day.

Highlights included 313p/kg for a British Blue steer (355kg) from Probert and Probert, Lower Hill, and £1,215 for a 510kg Limousin from GE Davies, Cwm Bromley.