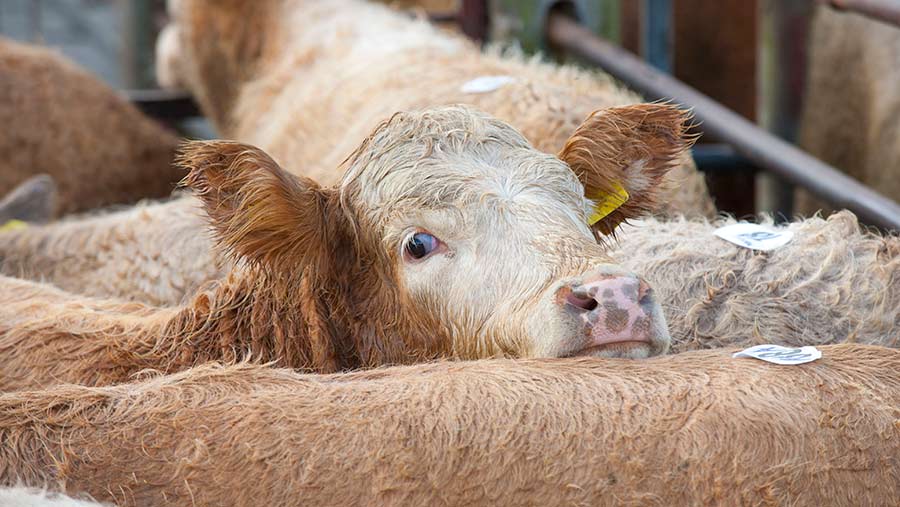 Store cattle values have strengthened £40-£50 a head in recent weeks to recover from autumn and post-Christmas troughs but the outlook remains far from straightforward.

A weak pound did not limit imports last year, with more Irish (+6%) and Polish (+38%) beef imported bought into the UK. And despite inflation and stagnating wages, consumers spent more on beef (+2.4%).

Meanwhile, a 70-100% hike in straw costs in some regions has led analysts to expect cattle to be rushed to abattoirs. There has, however, been no surge in slaughtering and some reports have circulated of cattle being over finished this new year.

AHDB analysts predict a dampening factor in the spring could be a 30,000-head rise (1.52%) in cattle slaughter for the first half of 2018, while consumers are expected to tighten purse strings.

Bullish factors, however, include Basic Payment Schemes being worth more due to currency fluctuations and a 17% drop in store cattle going through the marts between October and Christmas.

Phil Anstey, market manager at Monmouthshire Livestock Auctioneers, says that while trade might be strong, costs are high too.

“Fuel and transport costs are rising and bedding is more expensive this winter,” he told Farmers Weekly. “Running a cow each year can cost around £600 to start with so cattle need to be making £1,200 as a yearling.

He recommended people look at what breeds the mart wants and try to provide an even batch of cattle to provide uniformity for the finisher and the retailer.

Store cattle have bounced £35-£50 a head across the board after Christmas but could have hit a top, according Trevor Rowland, Frome store and dairy cattle auctioneer.

He has noted particular demand for harder outwintered cattle and Friesians, which have got dearer since Christmas.

However, as spring approaches, Mr Rowland doesn’t expect cattle to get any dearer. “People say ‘the nearer the grass the dearer the cattle’ but I don’t think that will be the case this year.”

Demand is very much “horses for courses”, with some buyers liking the premiums and docility that Aberdeen Angus and Hereford cattle bring. Meanwhile, calves out of smaller cross-bred, spring calving herds are not fancied, unlike the fleshier Holsteins and Friesian stores.

A trend for vendors to sell around 10-12 months old has developed in north-east Scotland, where Murray Rainnie of United Auctions has seen prices “kick off well” in 2018 at £50-£60 up on the year.

“Traditionally, at this time of year we would see a lot of forward cattle but many people now sell at 10-12 months rather than 18,” said Mr Rainnie. “We see the premium for shapelier cattle come into play later on in the run. It’s for the plainer end of the cattle – that’s when Charolais or Limousin cattle are rewarded.”

Looking ahead, he said there could be a gap in cattle supply in May/June, but didn’t see the market changing in the short term.