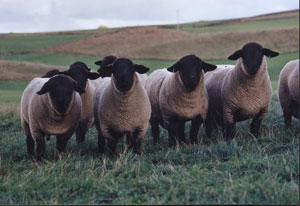 A new project has been set up to investigate how production efficiencies can be boosted by using the Suffolk as a terminal sire.

The new project, which is part of Quality Meat Scotland’s Scottish Sheep Strategy group, was officially launched early in the week (17 May) at Morrisons Farm, Dumfries House Estate.

The scheme forms phase two of the successful Focus Farms project, aimed at gauging the effectiveness of using Estimated Breeding Values to improve the performance of commercial flocks.

The new project, which will again be managed by Alison Glasgow from Signet Breeding Services, will be similar in nature to that of phase one, but will involve three Scottish commercial farms:

High Index Suffolk tups will be used on the farms over two seasons (2011 and 2012 lambings). Lamb performance will be monitored through to slaughter and compared to the performance of lambs sired by farm choice sires (un-recorded tups, bought by eye).

Farm meetings will be held twice each year – in the early weeks after lambing and once all lambs have been finished and full results are available. These are open to all local producers and industry representatives.