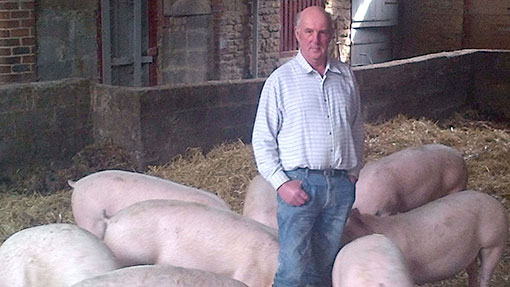 A Yorkshire pig producer is increasing slaughter weights by more than 17%, with no loss of quality, by choosing high-quality boars.

Stephen Till, who farms a 100-sow breeding and finishing unit at Welburn, York, switched to ACMC’s ultra boars one year ago to improve finished pig weights.

See also: All the latest from the Pig and Poultry Fair 2014

The combination of AI and natural service led to an average of 80kg deadweight – an improvement of 12kg deadweight – with 75% of these still under the 12mm probe measurement needed for top-grade pork.

Mr Till hopes to push this average still further, in excess of 85kg, through dietary changes.

“The current ration is ‘too good’ for the [finishing] pigs above 80kg liveweight, so we are making a change to a lower protein/lower energy diet. This, combined with the use of ultra boars and AI, should improve grading still further and reduce the cost of production during the final stages,” says Mr Till.

Despite additional feed costs of 90p/kg and extra fixed costs of 40p/kg (deadweight), Mr Till believes each 1kg increase in deadweight provides an extra revenue of £1.65.

“As a rough guide, at current feed costs, I reckon a 10kg deadweight increase — which is our eventual aim — should give an increased return of around £3 a pig,” he said.

Producing heavier pigs has put some pressure on housing space, but the flexible straw-based system enables him to increase stocking rates in some pens. Weaners go into outside arks at four-weeks-old and existing buildings are being altered to make extra pens.

“As we intend to become members of the Freedom Foods assurance scheme and we can see slaughter weights increasing still further, we realise in future we will need to construct extra buildings,” he adds.