The Scottish breeders Thomson, Roddick and Laurie, who run the herd at Eaglesfield, Lockerbie, led trade at 5,900gns, setting a new centre record price for the breed.

By Burnside Elite, and out of Outrawcliffe Emilly, she sold to Scottish breeder Scott Taylor, Kilbarchan, Renfrewshire. 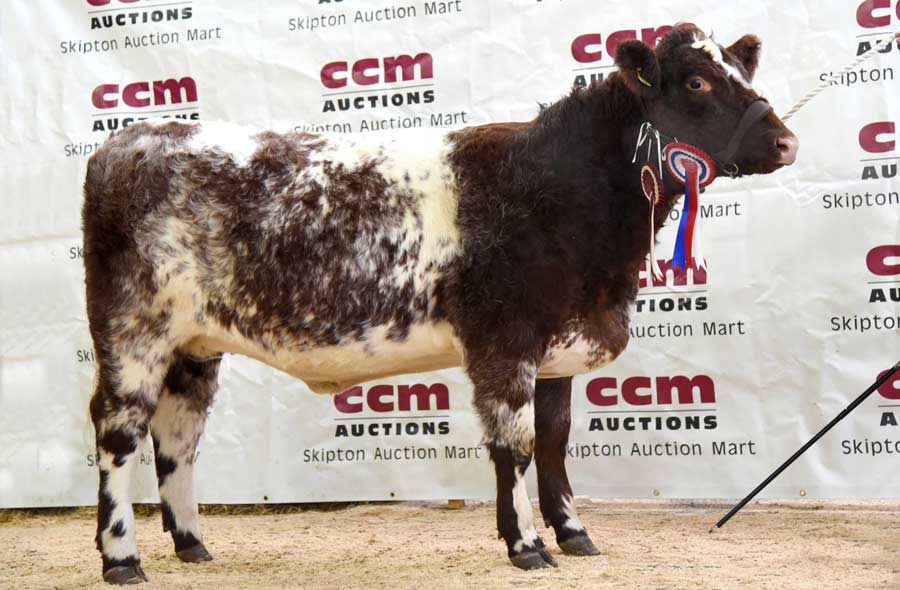 They also took the reserve title with their first-prize senior heifer and reserve female champion, Shawhill Tulip Heather, a 2014 fully home-bred roan daughter of their own Shawhill Frosty and granddaughter of Vortrekker of Upsall.

Carrying a service to the all-Canadian bull, Winalot Rodney X, she too fell at 3,800gns to Mr Taylor.

Second top price of the day at 5,000gns fell to a heifer from the Sandwick herd of Cumbrian breeders, Andrew and Caroline Ivinson, Townhead, Ousby.

The Ivinsons also sold a second pedigree heifer, the May, 2015, Sandwick Jane Austin Rose, by Stoneyroyd Gallagher, at 2,300gns to Perth’s DS McFadzean.

The Upsall herd run by Gerald Turton at The Grange, Upsall, near Thirsk, this year consigned a total of 22 lots in the sale, topping at 4,000gns with a well-used cow, Tessa X302 of Upsall, fast approaching 13 years of age, with her 10th calf at foot – a heifer, Tessa X1149 of Upsall.

The dam, who is in calf again, is by Uppermill Recto joined the herd of Tom O’Fee, of Cleater in Cumbria.

Another Upsall mother and daughter outfit made 3,700gns – this for the 2012-born Comet of Upsall daughter, Clipper X864 of Upsall, and her heifer calf, the January-born Clipper X1125 of Upsall, out of Grenadier of Upsall.

This one sold to RJ Baudains, of Nunnington, York.