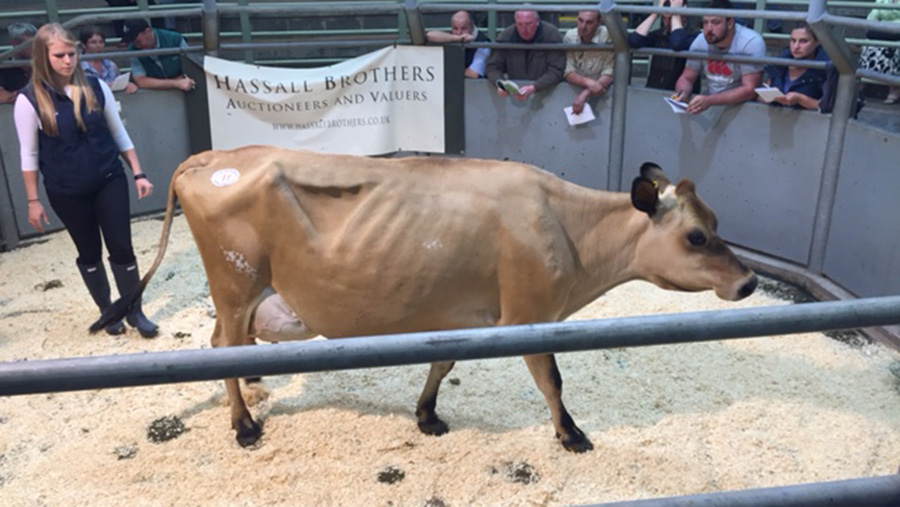 Autumn-calving cows were in high demand at the Heathwaite reduction sale of Jersey and cross-bred cattle on Friday (24 June) at Market Drayton Agricultural Centre on behalf of the Jenkinson family, Cumbria.

The Jenkinson’s stock numbers recently hit an all-time high and subsequently, the family made the difficult decision to significantly reduce the size of the herd in order to create space for a new batch of in-calf heifers.

This cow calved with her her second calf on 28 May and is giving 22.4kg. She sold to FG and G Mountford, Welshpool for £990.

Cross-breds peaked at £860 for a recently calved, second-lactation cow.

The buyer was G Bristol, from Penkridge, who bought a total of nine dry cows for his autumn-calving system.

This Friesian in-calf cross-bred made £600

A third-lactation Friesian cross-bred cow, in-calf to an Aberdeen Angus, was sold for £600. The cow last calved in November and was due to calve again in October.

Commenting after the sale, Dan Hassall, director, Hassall Brothers said: “Trade was very encouraging indeed. July and autumn calvers were particularly in demand and there was a strong overall trade for cows.

“An average selling price of almost £700 was achieved – I think this demonstrates that a newly found confidence in the milk prices is emerging.

“Buyers were paying particular attention to the value of constituents, especially protein.

“Moving forward, it’s highly likely that we will see an upward trend in the price of cows.”