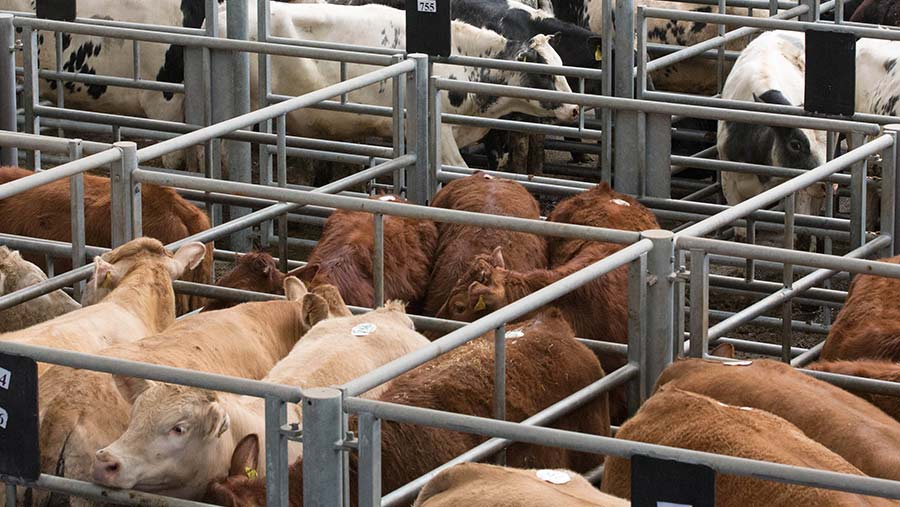 Analysts are suggesting cattle prices could lift through the autumn after a summer that beef producers will want to forget.

Values often fall sharply in the first half of the year due to less prime cut demand, according to the AHDB.

However, the 2016-18 period was stable because of strong manufacturing beef demand across the EU.

The levy board added that a 7% lift in Irish beef production, higher UK slaughter weights and lower retail and foodservice demand had pressured cattle values.

However, national figures show UK beef imports back 11% on the year for the second quarter of 2019. Exports are up 7%, with lower calf registrations in 2018 a potential driver of strong beef prices in late 2019 and 2020.

He said the market was pricing cattle below cost of production and called on retailers to market beef as a nutritious protein source to stimulate demand.

This is sharply back on the year, when both classes of livestock were selling for 180-190p/kg.

However, he said store sales have been resilient and throughputs have been 50% higher than a year ago, with 716 head sold on 17 August and 605 sold on 24 August.

“Breeding stock are selling well too,” he added. “A good second calver with a tidy calf will probably make £1,200, so there is still confidence in the sector.”

Cattle trade has picked up ever so slightly in the past couple of weeks for fat cattle auctioneer Richard Haigh at Selby.

“It feels that the market has bottomed – touch wood,” said Mr Haigh. “Normality will soon be resuming with holiday season over and children going back to school, which usually helps demand.”

He said a slight influx of cattle at the market had been seen when processors dropped prices, but this ended six to eight weeks ago.