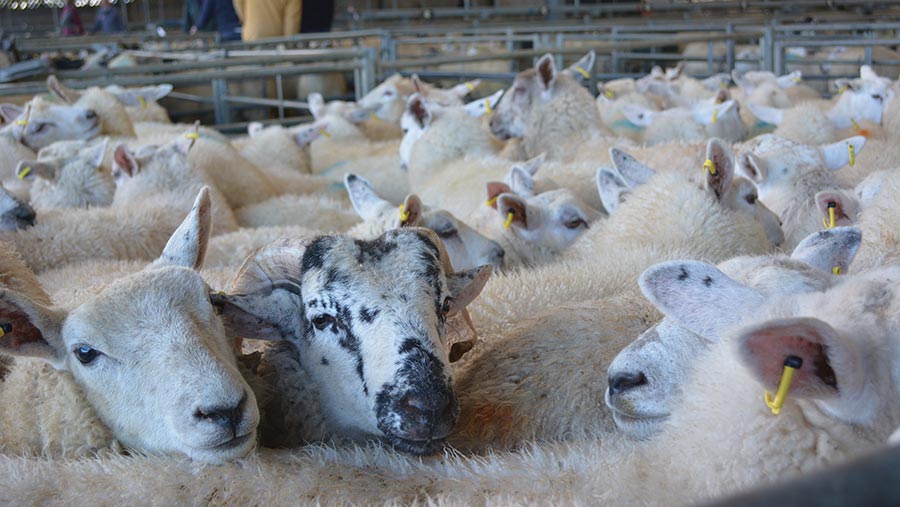 Farms with lambs still to sell are faced with an unprecedented quandary this year as marts average more than 200p/kg in the prime ring and long-keep stores hit £3/kg.

Many in the industry are talking about current store prices potentially having a sting in the tail, but talk of short lamb supply in the new year is underpinning buyer sentiment.

Defra slaughter statistics are down, and New Zealand has targeted 13% more lamb at the Chinese market as China rebuilds its depleted swine herd.

See also: Red meat levies to be returned to home nations from 2021

Numbers are tightening a little earlier than normal at Leek, where many vendors have seen strong prices and the threat of Brexit as reasons to cash lambs early in store or prime rings.

“The entry was about 2,000 head less than the year before,” said Robert Watkins, sheep auctioneer at Leek Auctions. “We’ve seen similar numbers this season, but now they are drying up.

“There are a few lambs being bought out of the fat ring as stores, but light lambs, particularly anything under 38kg, have become hard to get hold of.”

Mr Watkins said Covid-19 and Brexit uncertainty had led many vendors to increase weekly entries to clear lambs two or three weeks earlier, but he stressed that many vendors were targeting the new year and spring market as normal.

Store lamb trade remains up to £15 ahead of last year at Hailsham, where vendors are currently in the “last chance saloon” before Brexit potentially bites, according to Nick Young, sheep auctioneer at Hailsham for South East Marts.

“At these prices it surely cannot pay to finish them unless you have vast quantities of roots and there is a significant upturn in trade post-Brexit,” he said.

With store lambs very dear and more susceptible to a hard Brexit, Mr Young said there was scope for feeding ewes to get dearer still.

He said many good Texel cross and Suffolk cross ewes with size and frame to add flesh to had made £80-plus. Cull ewes represented a far less Brexit-dependent gamble, he added.