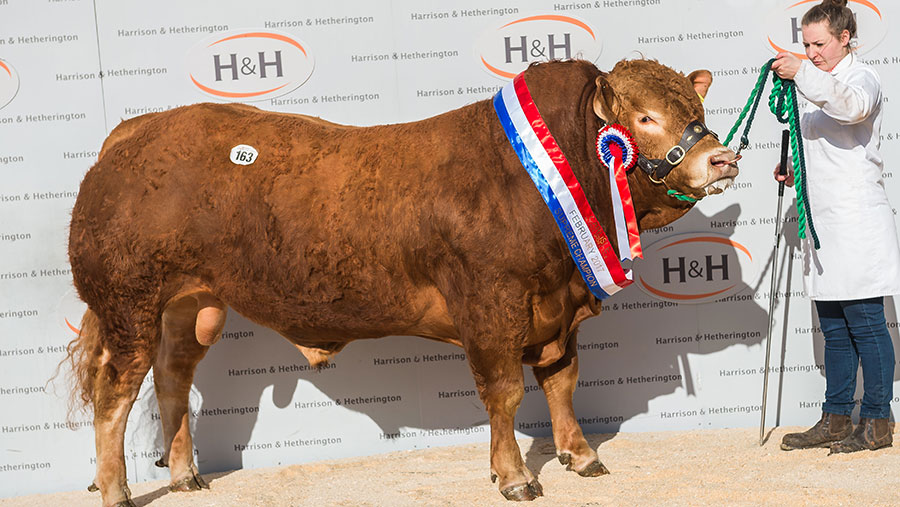 A steady trade for bulls and females at the early spring beef breed society sales at Carlisle last week (24 February) saw prices rise to 8,000gns for the Blonde bulls on offer.

This May 2015 born son of Hilltop Hector and out of Hallfield Dizzy was purchased by Keith Eunson from Deerness, Orkney.

Next in the money at 5,800gns was another entry from the Hallfield Pen, this time Hallfield Lewis. A son of the herds main sire Blackwater Ainsley and out of Hallfield Rhona, he sold to J and K Metcalf and Son, Richmond, North Yorkshire.

The July 2015 born maiden heifer is by Abricot and out of the prolific herd show winner Shanvalley Hoshi. She went home with W Hall, Stranraer.

Also from the same home was Shanvalley Lacey who was by Shanvalley Gonso and out of Shanvalley Holla. Mr Hall also snapped up this one for 200gns less.

The female trade was led at 3,200gns for Knockenjig Margo SSI +23, RI +22, a red and white six-year-old by Cavans Northern Light and out of a Glenisla bred dam.

Bred and exhibited by David and Rosemary Dickie, Sanquhar, Dumfriesshire, she was sold in calf to Glengoy Geronimo to J Adamson, Turriff, Aberdeenshire.

Sired by NBG 69T The Wonderer and out of the homebred cow Barwise 1 Graceful G2 the 21-month-old was purchased by J and D Whalley, Ulverston.

This March 2015 born son of NJW 73S W18 Hometown 10Y is out of Harvie Ms Firefly 65P and travels to Herefordshire to join RJ Verdin, Weobley.

Although numbers were lacking with only five bulls and three females forward, demand was strong for the Whitebred Shorthorn stock on offer.

Mr Pattinson went on to invest his money from the top-priced lot in the second highest lot – the day’s champion, Blackburn Jethro from G Jackson, Newcastleton, Roxburghshire.

Also April 2015 born he is by Barlaes Welcome and out of Blackburn Margaret.

By Longley Talisman and out of Hole of Lyne Weigela 2nd she sold having been served in December to Blackburn Monty to MG and J Taylor, Dippenhead Farm, Largiemeanoch, Isle of Arran.