Charolais met a strong commercial demand with 67 bulls selling to an average of £5,007 and peaking at 14,000gns at the Carlisle spring Charolais sale on Saturday (14 May).

He added: “The feedback from the commercial suckled calf producers is that calving ease and efficient growth are of paramount importance and the growth rates and the inherent value of the Charolais-bred heifers is being realised as a bonus to increase margins from beef production.” 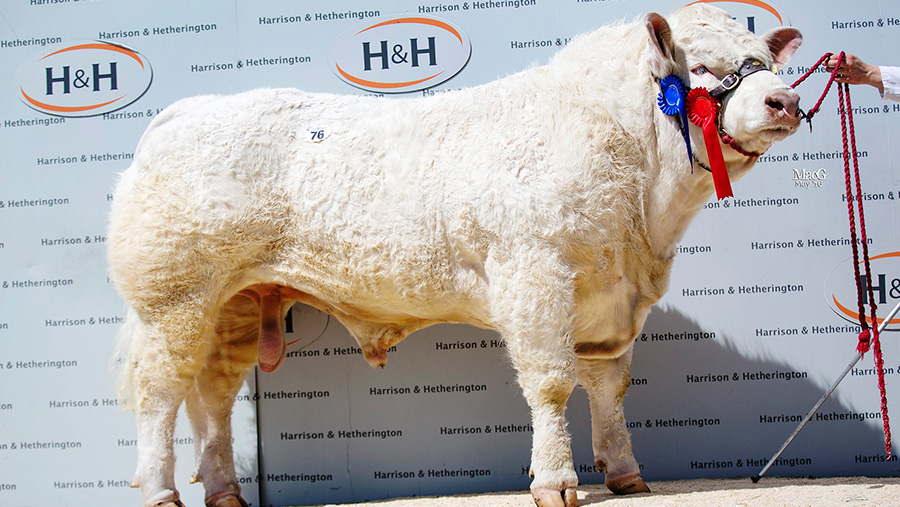 Joss was purchased by William and James Causey, Cookstown, County Tyrone, and was bred and exhibited by Hamish Goldie, Ruthwell, Dumfriesshire.

He is sired by the 15,000gns Gretnahouse Heman and out of the home-bred dam Goldies Dignity who goes back to the 30,000gns Dingle Hofmeister.

This December 2014-born bull was knocked down sold to ER Hollingworth and Son, Middleton, Lancashire, for 7,000gns.

A trio of bulls sold for the next highest price of 9,000gns. 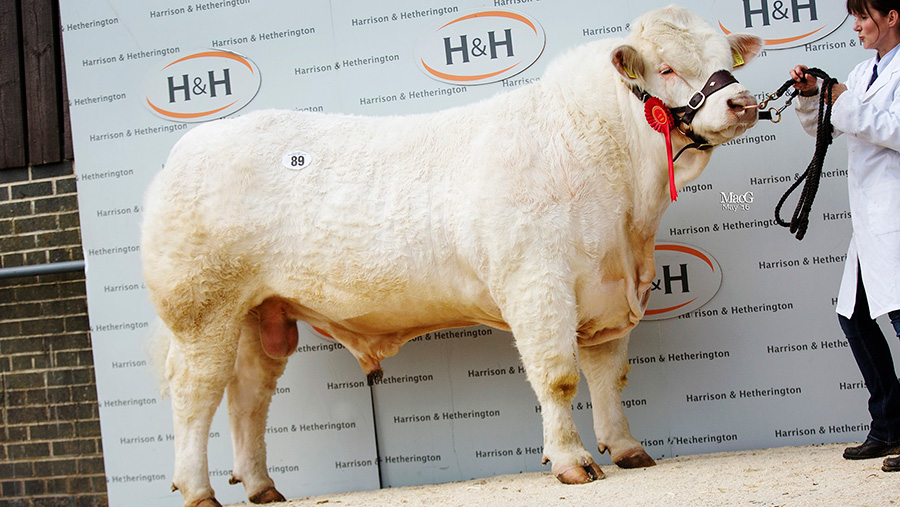 The first, Nuthamsptead Judas TI +51 SRI +45 was a 16-month-old class winner sired by the 10,000gns Thrunton Goldeneye and was jointly purchased by John Christie, Stirling, and Iain Millar, Port of Menteith, Stirlingshire. 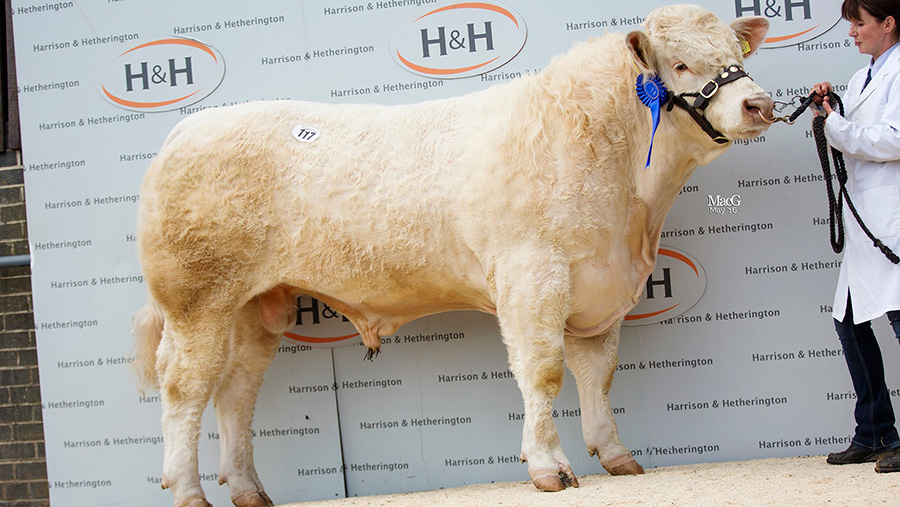 Judas was the first of five lots consigned by Caylers Charolais, Nuthampstead, Hertfordshire, and their next, Caylers Legend TI +62 SRI +52, another son of Goldeneye matched the 9,000gns price tag when he caught the eye of J Nelson, Castle Douglas, Kirkcudbrightshire. 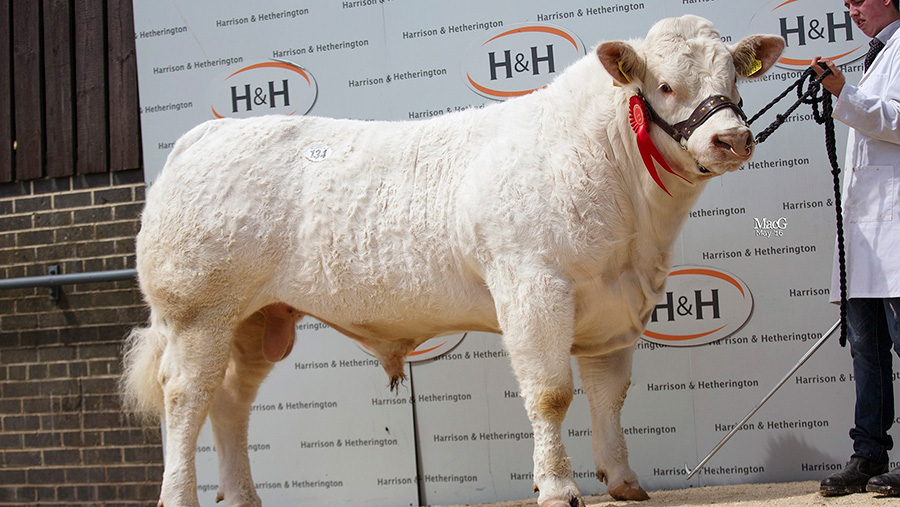 The third bull to sell for 9,000gns was the red ticket winner Newhouse Longbow.

He was knocked down to Messrs Evans and Corfield, Ludlow, Shropshire.

The 28,000gns Stirling champion Elgin Glenlivet was the sire of this 15-month-old, who was bred and exhibited by RM Adam and Son, Forfar, Angus.

This November 2014-born lad is sired by the 11,000gns Balthayock Adonis and was purchased by A and T Wilson, Newton Stewart, Wigtownshire. 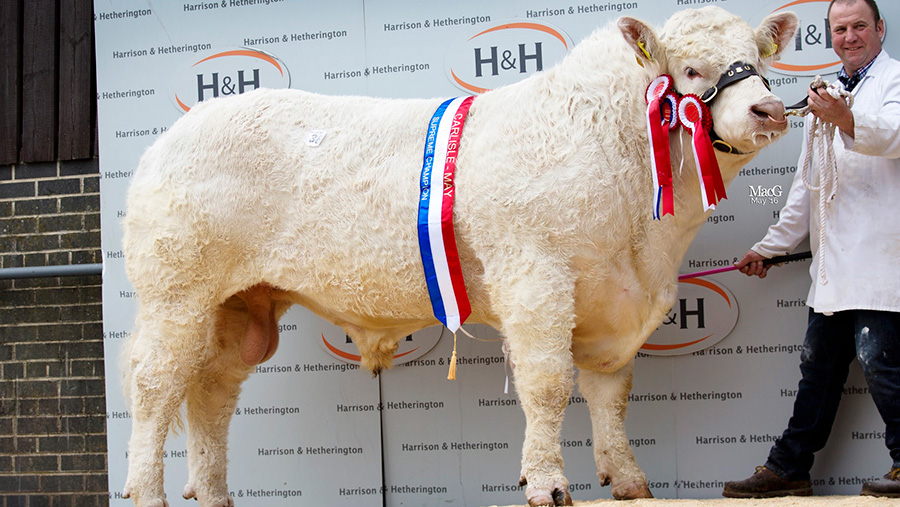 The supreme champion Gretnahouse Jugular TI +65 SRI +60 was the next to sell for Mr Houston and the judge Gareth Roberts, Llangadfan, Powys, backed his judgement by buying this 20-month-old for 8,000gns.

The bull was sired by Blelack Digger and his dam Balmyle Paradise has bred bulls to 25,000gns.

The reserve male and junior champion was next to sell for local breeders Michael and William Cleasby, Penrith, Cumbria.

The 16-month-old Cleaden Juggernaut by the home-bred Cleaden Guardsman was knocked down to John Weir, Galashiels, Selkirkshire at 8,000gns.

Jimbo a son of the 12,000gns Harestone Glenlivet went on to Northallerton, North Yorkshire with A Clark.

An added feature was the draft sale from Messrs Curry’s Burradon herd from Morpeth, Northumberland, which peaked at 3,800gns for Burradon Emily and her five-month-old heifer calf Burradon Leanne.

Emily is sired by the 12,000gns Gwenog Banjo who has bred sons to 26,000gns and her daughter Leanne goes back to the 10,000gns Puntabrava Federico.

This pair caught the eye of A McCornick and Co, Lochfoot, Dumfriesshire.

Next up for at 3,100gns and selling to E Townend, Huddersfield, Yorkshire, was Burradon Fallon and her six-month-old daughter Burradon Loticia.

Just behind at 3,000gns was Burradon Havana TI +50 SRI +46 and her heifer calf the November-2015 born Burradon Lorna who travelled across the water to Cookstown, County Tyrone with William and James Causey.

The female champion was also selected as the reserve supreme champion and was consigned Hamish Goldie, Ruthwell, Dumfriesshire. 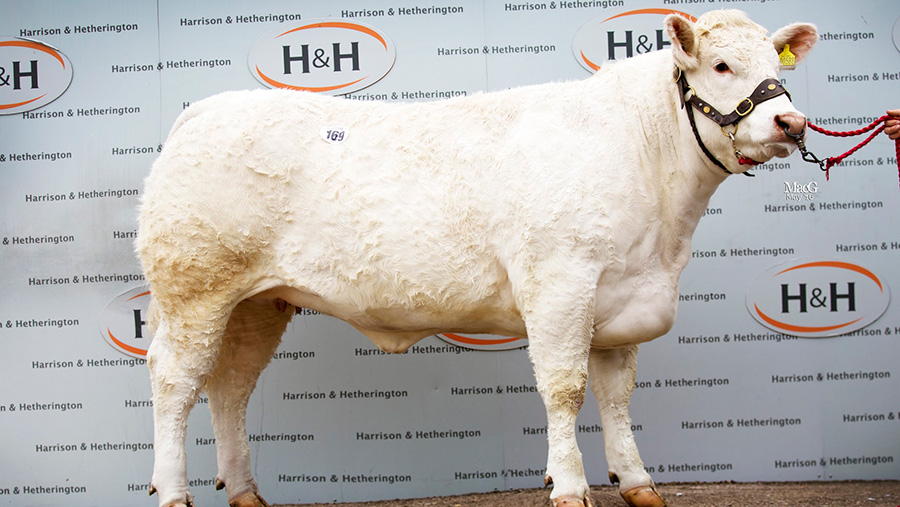 The purchaser was Thomas Epps, Ardnave, Bridgend, Isle of Islay.

Finally at 3,000gns and purchased by Preston Farms, Omagh, County Tyrone was the reserve female champion from John and Jenny Rix, Colchester, Essex, Wissington Jemma TI +55 SRI +53. She is a 26-month-old daughter of the 12,000gns Thrunton Galaxy.