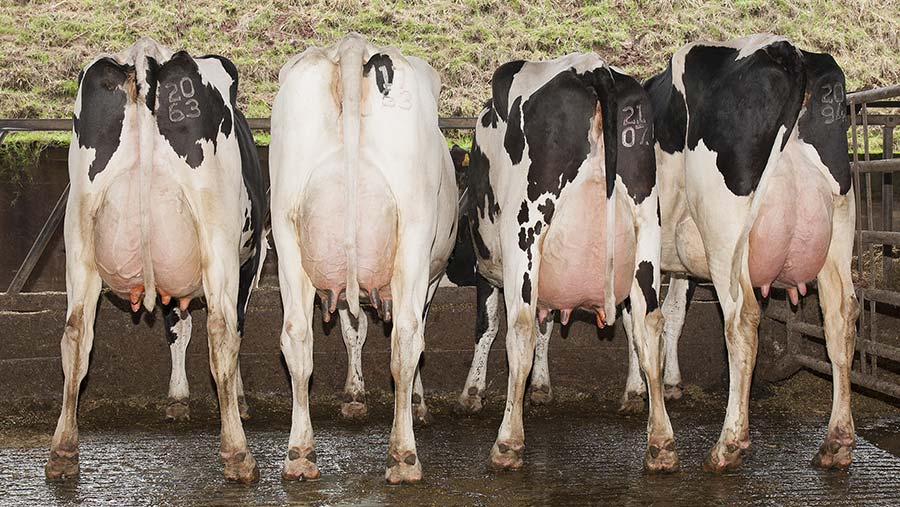 A strong showing of 59 buyers yielded 23 calls of more than £2,000 and a top call of 2,900gns at the Dyrfal dispersal of Oli and Ed Partridge, Monmouth, on Thursday (7 February).

The high-yielding herd attracted buyer interest from all over the southern half of England and across Wales and topped with Miresdale Heatherbell 496, which sold to a Carmarthenshire buyer.

A total of 17 counties were represented at the sale, which was held on farm at Lower Buckholt, where the 401-head herd had averaged 11,200kg a lactation at 39.6kg/day, with a calving interval of 387 days and a pregnancy rate of 22%.

The same Carmarthenshire bidder also made the second-highest call of the day. This was a call of 2,550gns for the top-priced calved heifer on the day, Dyrfal Destry May.

She calved in January and is out of a VG85 cow of the Richaven line that gave 10,996kg. She is by Scientific Destry.

A Herefordshire buyer bid 2,450gns for Dyrfal Smirnoff Margaret, which calved in January with her second calf. She is by Richaven Smirnoff and from a dam and grand dam that both gave more than 13,500kg in their best lactations.

Next at 2,350gns was Dyrfal Hannah Red, a second calver by Pen-Col Berkley Red, with a winning bid form a Dorset buyer.

Some bidders came for large numbers of cows, with 117 animals heading home with four buyers from the South West.