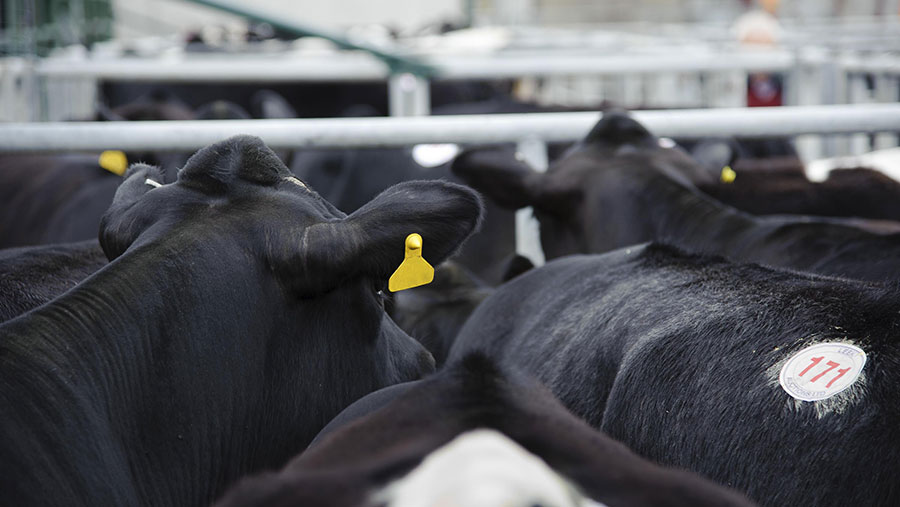 Rising feed costs and winter forage shortages are still stifling an otherwise much firmer dairy trade, which has been strengthening since the summer lows.

First-choice cows and fresh heifers giving 30 litres and more remain easily sold and not far behind last year’s prices, but auctioneers say anything off the mark is difficult to sell.

Feed wheat peaked on 9 August at £180.50/t (ex-farm), the highest value for five years, before falling to about £170 late last week, according to AHDB figures.

This is one of several factors contributing to cautious bidding around the marts.

See also: See all the latest livestock prices and trends

A lack of supply is supporting trade at Sedgemoor, where Derek Biss, partner and auctioneer at Greenslade Taylor Hunt, has seen several herd dispersals postponed until 2019.

“People are worried about the second-quality trade and that their best cows and heifers will sell well and bidders will leave everything else,” he told Farmers Weekly. “We aren’t flooded out with sales at the moment.”

Mr Biss said pedigree trade seen at recent dispersals was roughly £150-£200 down on the year, but that prices might narrow to £100-£150 back on the year in October.

“It’s the commercial youngstock that has been affected most. Feed shortages mean anything not giving milk is not really fancied – it’s the same for the January to April calvers.”

Mr Biss said forage concerns were worse to the east of Sedgemoor and that those selling on the spot market saw prices drop to 29p/litre last week.

Trade has definitely firmed since prices slipped back £200-£400 earlier in the year, according to Simon Lamb, senior auctioneer at Wright Marshall.

The best end of the cattle is not much different to last year and still regularly breaks the £2,000 mark, but some classes of heifers are still feeling the effects of what has been a very difficult forage year.

“However, anything that is good is selling itself very well, but anything lacking strength or milk is struggling to find an audience at times – people want 30 litres and more to pay the bills straight away.”

On the positive side, he said grass started to move in September and maize is now in a lot of clamps and reports are that it has performed “fairly well”.

He added that youngstock always struggle to sell in a year of fodder shortages and that trade is also being held back by stock not being quite as fit as in some years, with some animals showing the effects of the weather.