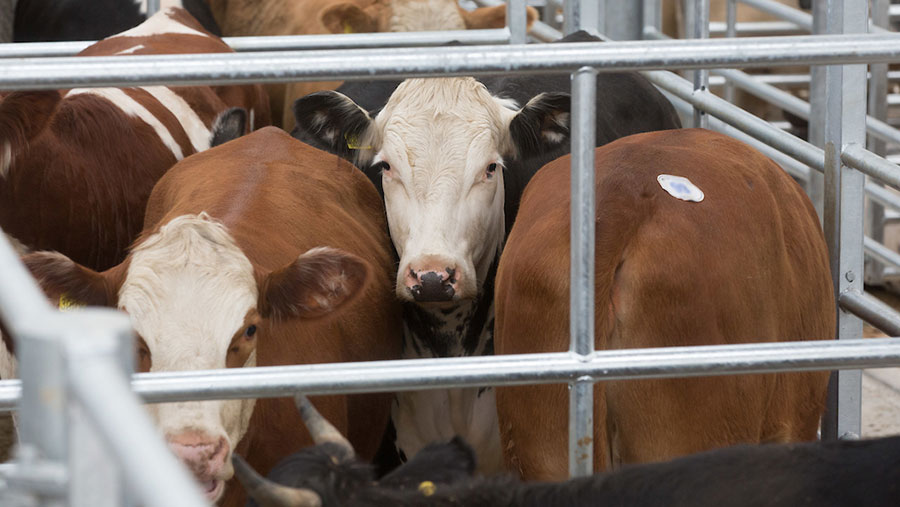 Finishers are paying more for store cattle this year following a minor improvement in processor demand and pricing.

Store cattle prices hit a historic low in the autumn of 2019 but have since tracked a slight rise in prime beef values, with an R4L steer up 4.6p/kg since the start of the year to 345.6p/kg.

However, this 4% increase in prime cattle values is being outstripped by a 7-11% lift in store cattle prices, AHDB data show. This means finishers are feeling the pinch again.

Auctioneer Trevor Rowland told Farmers Weekly that trade was flying. Cattle were £50 up on the year and more than £100 dearer on the autumn price.

He said finishers were turning over cattle quickly, with abattoir waiting lists no longer an issue. However, he stressed that with current beef prices, finisher margins would be very thin.

“If you’ve sold your fat cattle – and there are plenty of people selling 50-60 a week – you can’t stand still, you’ve got to replace them,” he said.

“There’s serious competition for stores and at times they do look too dear.”

He said the current costs to feed a big heifer for a week were £15 and for a smaller heifer £10-12, which he said made profits looks very slim.

He said the quality of calves was now slightly better, with a good number of high-quality yearling suckler cattle coming through the ring.

He said the availability of feed this year was helping demand, particularly for younger cattle.

“People can buy earlier and wait for the grass because there is plenty of feed,” Mr Roberts said. “This is helping the smaller cattle sell. We are also seeing slightly more forward stores at the moment as people have held on to them at autumn time, hoping for a lift in the trade.”