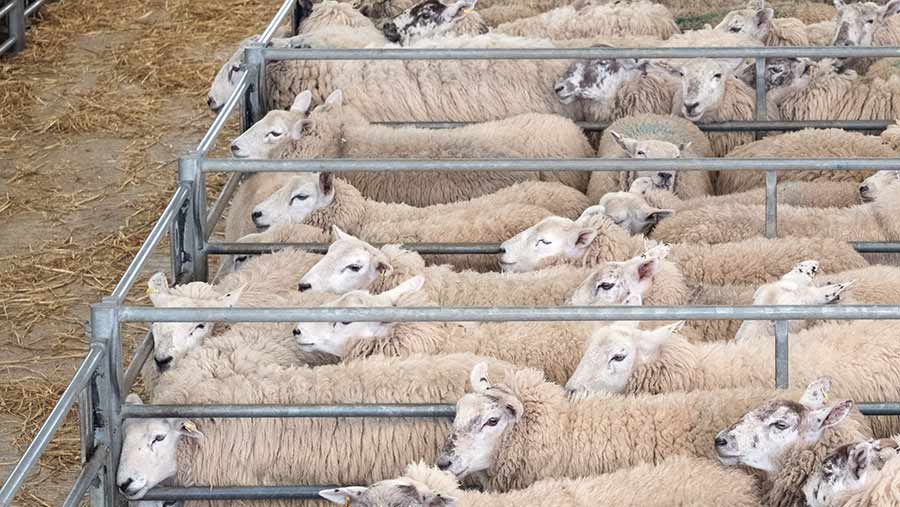 Heavy lamb values are suffering at centres across the country amid an autumn flush of grass and plentiful lamb supplies.

Monday’s sales saw heavy lambs (45.6-52kg) discounted at most marts, with the best price per kg price instead favouring the medium lambs (39.1-45.5kg).

Larnark, Ludlow, Hull, Monmouthshire, Rugby and Skipton all saw medium lambs selling at 8-13p/kg dearer than heavies, a dramatic turnaround from earlier in the year when weight was in short supply.

Drew Kennedy, auctioneer for Craig Wilson at Ayr, saw heavy lambs sell for 9p/kg less than mediums. Mediums averaged 164p/kg and some sold up to 170p/kg and above on Monday (15 October).

“People should have probably sold lambs sooner, but it’s difficult,” Mr Kennedy said. “Earlier in the year marts were short of heavy lambs, and now we have had an autumn flush there are plenty above 44kg about.”

He predicted that prime lamb numbers would get tighter later into the year, with very little difference in throughputs so far on 2017 levels, other than the slow start to sales at the beginning of the summer.

One exception to the rule that heavier lambs are not paying is Exeter, which, along with Ruswarp and York, reported a premium for heavier weights.

Russell Steer of Kivells said heavier lambs were the better-fleshed lambs in his area, and drew a keen audience of wholesale butchers at Exeter.

“The lighter weights are sometimes under-finished,” Mr Steer said, adding that he had been frustrated with some poor marketing decisions taken by farmers.

Monday’s trade saw 905 spring lambs average 5p/kg less on the week to make 159p/kg, with 210 lambs pulled out of the prime ring and instead sold as stores.

“Trade was the same as the week before but the quality was down and that threw the average back 5p/kg,” said Mr Steer.

“It’s important farmers think about marketing and whether something is better off in the store ring because it only takes a few markets to be back 5p/kg or so and suddenly the deadweight quotation drops 10-15p/kg, which then pressures the live ring.”

Numbers of lambs are consistent with recent years in North Wales and the border counties, according to John Brereton of Jones Peckover, who saw 3,387 lambs hit an SQQ of 178.84p/kg last week (11 October).

He said trade was firm for both export and heavy lambs at St Asaph, although farmer returns are under pressure, and he stressed that hill-bred lambs at 25-30kg were difficult to sell.