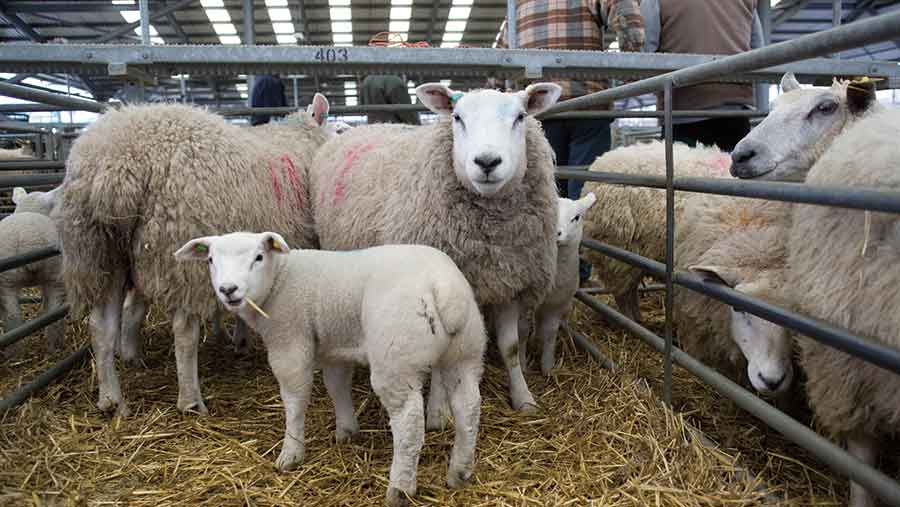 Breeding sheep with lambs at foot have met a good trade in general this spring, with interest maintained at northern marts by a late spring grass flush.

Several sales reported fluctuations and more of an “up-and-down” trade on the year, with lower buyer confidence eventually boosted as grass became plentiful into May.

A relatively large yarding for the time of year saw sharper trade on the week at Craven Cattle Market on Monday (6 June). Prices peaked at £170 for Beltex with twins from Richard Caton, who also made £132 for a Cheviot with twins.

Recent sales at North West Auctions have shown no signs of slowing down, with hoggs and lambs selling to £172 on Monday (6 June).

This was the pick of another nice run of single Suffolk outfits from RM Wilson, Horton-in-Ribblesdale, leveling at £165 a family overall. A consignment of older sheep from S Dingley, Aughton, made £98 a family.

Early trade enjoyed high demand for older ewes with lambs that could be split, with the interest then turning towards good-quality breeding sheep in May, according to Ian Atkinson, livestock auctioneer of North West Auctions.

“In late March and early April the younger sheep that would have been ideal replacements were not as fancied due to the slow spring,” he said.

“Good-quality sheep have been in strong demand and we have had prices up to £325 a family for Mule hoggs at J36.”

Tuesday (7 June) saw the year’s dearest ewe and lamb trade at Longtown, boasting prices £3-£5 a head up on the week.

An excellent turnout of buyers supported strong trade for a good showing of 1,017 females overall across close to 400 outfits.

“Sunshine and higher temperatures in the 10-day run-up to Tuesday’s sale helped prices reach par with where we were last year after starting back on the year,” he told Farmers Weekly. “Grass makes trade and now there is an abundance of it.”

He said a later lambing for some and little spring grass had meant some saleyards had pushed breeding sheep sales back from the first to the third week in May.

“It is not just the weather, though. The fat trade has lifted as well,” he added. “We have seen new-season lambs making just over £2/kg and cast ewes making £70 to £80.”