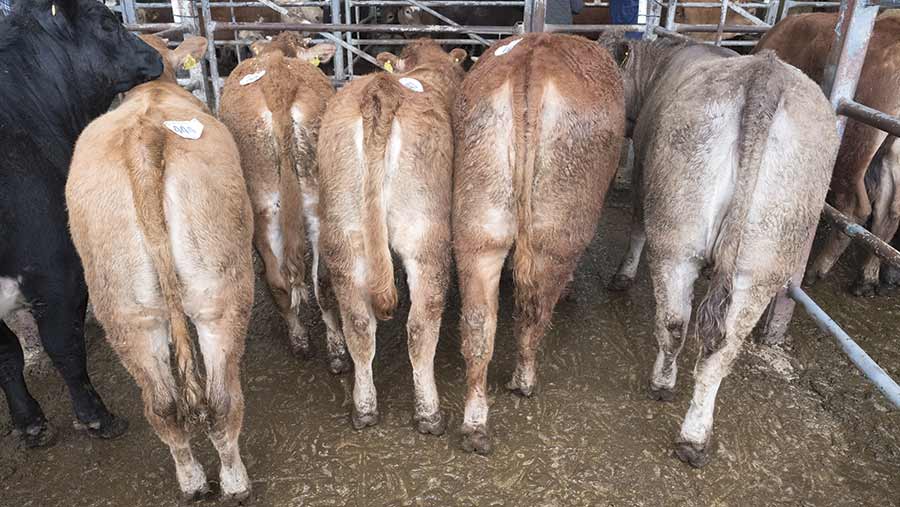 Underpinned by steady trade in prime cattle, store sales have been buoyant with cattle selling well.

Longer-keep cattle have been less desirable due to the late spring, but the tide is starting to turn with auctioneers predicting the spring boost is just around the corner.

A combined total of 1,120 stores went through the rings at Bakewell (Monday 16 April) and Leek (Saturday 14 April), where delayed turnout dampened trade for younger sorts.

Bagshaws auctioneer Mark Elliot said smaller stores were a shade more difficult to sell compared with larger and better-meated cattle over 16 months of age, regardless of type.

“They are not massively down but they are harder to sell. But the bigger cattle have been exceptionally good trade and they are still a good trade.”

But he predicted a lift in trade for younger cattle in a “matter of weeks”.

At Monmouthshire Market in South Wales, auctioneers reported that trade was buoyant for all stores, with smaller and especially the better-fleshed animals selling well.

Throughput and prices were up on the year at the last store sale on Wednesday (11 April), with 337 stores forward and feeding and grazing stores easily sold, despite dismal weather on the day.

The top price of £1,460 was paid for 23-month-old Charolais crosses from MR Smith.

Feeding heifers peaked at £1,210 for 620kg Limousin crosses from R Davies, and yearling heifers sold to £815.

However, 10-month-old continental heifers are not quite as sought-after as they were a month ago.

Trade has been similarly strong in the Scottish Highlands, although auctioneers say the weather and grass situation means they haven’t witnessed the spring boost in prices yet.

Numbers and prices sold are about on a par with last year, said Ian Tolmie, auctioneer and managing director of Dingwall and Highland Marts.

A good-quality show of breeding heifers sold well, with 233 heifers averaging 227.3p/kg and selling to 285.1p/kg and £1,220 gross for a pair of 428kg Simmental crosses from Torgorm, Canon Bridge.

Demand was healthy for both grazing and nearly finished sorts, with prices for the longer-keep cattle the only ones affected slightly by the lack of grass.

“We have seen a ready demand for heifers because they will finish sooner and won’t get out of spec,” said Mr Tolmie.

“But you would be right to say the younger and very small cattle have been most affected, but not overly so. It is wonderful that trade is as strong as it is, given the lack of grass.”