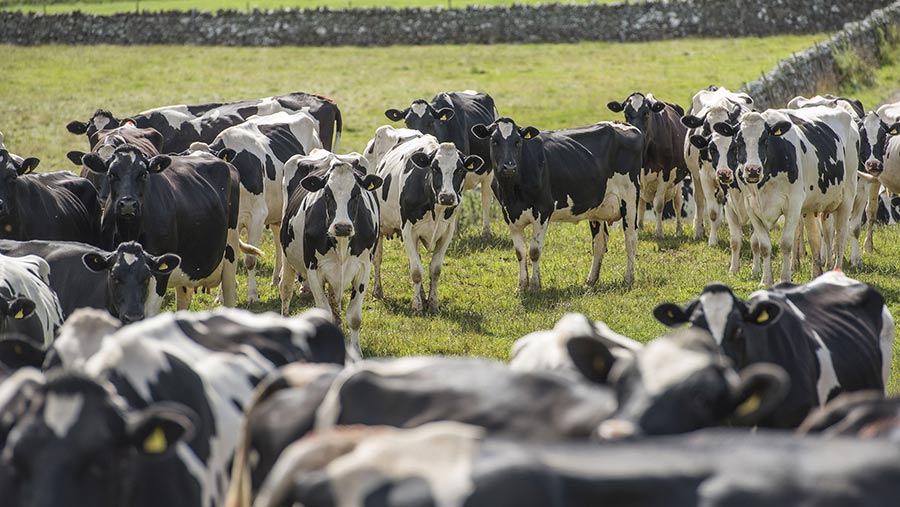 Red-hot dairy cattle prices could cool slightly as a wave of Bounce Back buying ends and cattle supplies improve.

A growing list of dairy dispersals and the resumption of cattle imports will give more options to buyers this summer.

And demand could be curbed as buying supported by government-guaranteed Bounce Back loans looks to be over, say auctioneers.

This is the latest twist in a turbulent three months, when prices dropped under farm-to-farm trading, then rallied as marts reopened.

Strong well-bred 30-litre heifers have been flying to £2,200 and beyond regularly at Gisburn, although auctioneer Fred Spurgeon believes trade might ease in coming weeks.

He said an easing of lockdown would probably help cattle numbers, which would soften prices after a period of tight supplies.

Several fresh faces had been seen recently, with a lack of imports and dispersals meaning demand was not met some weeks.

“It was incredible, especially when considering the milk price and grass situation on some farms,” Mr Spurgeon said.

Some farmers who had taken advantage of  the government’s £50,000 Bounce Back loan guarantee had spent the money on cows, and this had “blown regular buyers out of the water” for a few weeks. But that £50,000 was soon spent, he said.

Trade is currently £200 dearer than before lockdown and £400 dearer than during lockdown, according to Jonny Dymond, auctioneer at Shrewsbury for Halls.

He said heifers had gone from struggling to trade at £1,750 in April, to buyers giving £1,900 without hesitation in June and July.

Other factors underpinning prices were a firm barren trade and bovine TB culling.

“Bounce Back loans have had an effect,” said Mr Dymond. “The Bounce Back buyer is on a budget, but that then forces the trade up for regulars.”

There were some new buyers around the ring, but he stressed that demand was primarily because regular buyers had returned.