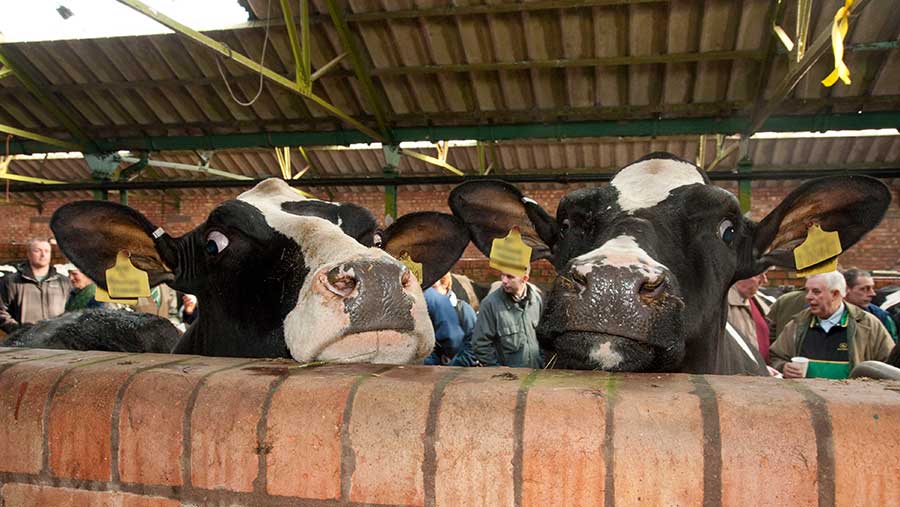 Milk price cuts pegged back milking animals by about £200-£300 or more before Christmas, but buyers reappeared in the new year to firm up trade.

Many cautious ringsides have made £2,000 calls the exception rather than the rule at weekly sales.

Demand is healthy for cows in the South West, where Derek Biss of Greenslade Taylor Hunt has seen the middle and lower end jump up £200-£300 so far this year.

“People have gotten over the shock and disappointment of November,” said Mr Biss. “After being at 18p/litre, they feel they can cope at 28p/litre. We are still seeing resistance to £2,000, but we are hitting it.

“Tight supplies of cows are helping a good – but not flying – trade. I think we are in for a stale year with no fireworks.”

The increase seen in average prices at the latest Global Dairy Trade auction. The biggest increase since 1 November 2016

Dairy auctioneer Glyn Lucas said: “If you were comparing trade to October, we could have been averaging £1,900-£2,000 for the quality on offer.”

How and when intervention stocks of SMP are sold and clearer signals from the GDT could provide clarify the outlook for the coming months, Mr Lucas said.

He added that the spring flush could be limited by adverse weather conditions. “It’s rained since August in Ireland and many parts of the UK. I don’t think the grass quality or the ground conditions are there and it could reign in production.”

Demand for British-bred cows is being helped by a weaker sterling as EU imports are made to look dearer, Stuart Hassall of Hassall Brothers told Farmers Weekly.

However, at their weekly Market Drayton sales the Hassall Brothers reported a “very immediate” reaction to price cuts, which took £250-£300 off the second-quality animals before Christmas.

He added that dispersal enquiries had been mounting, suggesting that extra cows on the market could put downward pressure on prices this year.

Leek’s year opened with first-quality heifers averaging £1,813 and second-quality heifers at £1,502, with cows at £1,700. Since then trade has dropped back, but recovered last week (16 January) to see four animals at £1,800, including a commercial Shorthorn second calver.

“We have had quite a few instructions for herd dispersals going into the spring,” dairy auctioneer Meg Elliot told Farmers Weekly.

“We have had a swing to British Friesian and Shorthorns at Leek – they suit the farms in the area as they are sturdier animals.”