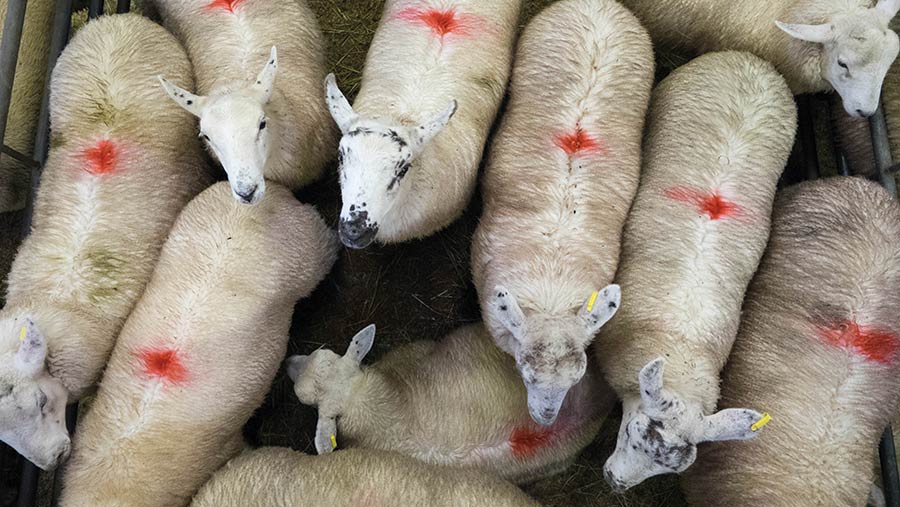 A deadweight advantage of £10-£15 a lamb could be eroded this week as lamb supply ramps up and processors make big price cuts.

Exporters have paid £5.80/kg deadweight for lambs this week, while some retail contracts have dropped prices below £5.50/kg. This equates to a drop of about £1/kg over two weeks.

Will Probert at RG and RB Williams said downward pressure had now been felt across all types of spring lambs at Ross-on-Wye.

“A lot of those Beltex lambs went north to be exported to Europe and they were selling for about £1/kg more than the more typical commercial lambs,” Mr Probert told Farmers Weekly. “This is the first week the best lambs have noticeably dropped here.”

He said farmers had done well feeding and putting weight onto lambs, but those who were selling lambs below 37-38kg had missed out on 10-20p/kg.

Many vendors would remain hopeful the price would track at about 220-240p/kg for the summer, he added.

He said last week’s (17 June) entry was, on the whole, a moderate and light show of lambs, but Islamic demand would reward 42-45kg lambs.

He predicted that the 8 July auction could be the better week for festival demand, given its timing this year, but stressed that butcher margins were very tight on lambs.