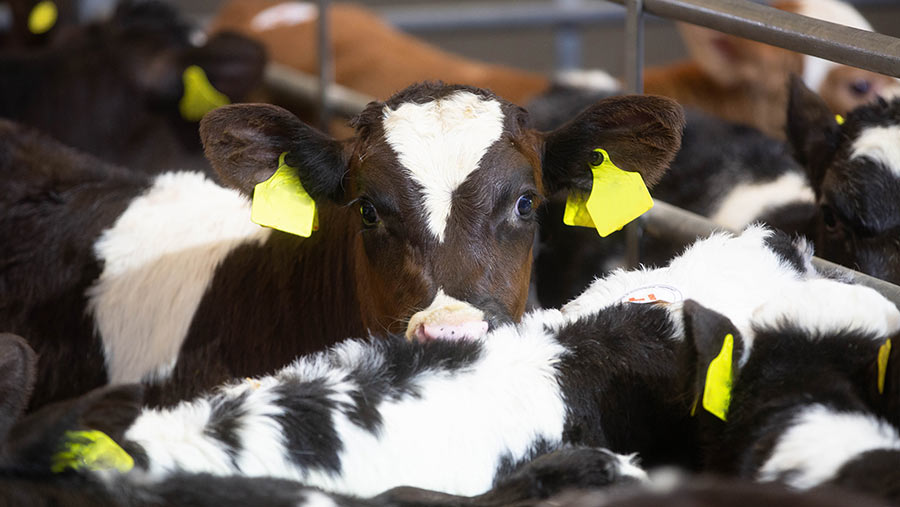 Dairy-bred calf values have strengthened since Christmas but remain back on the year amid a challenging winter, say auctioneers.

Latest AHDB prices for January calves (three weeks and younger) were down 5-15% on the year across all classes, but up on December.

However, trade is still firm for quality calves, meaning a ‘two-tier’ market has opened up as spring approaches.

Prices were down for both first- and second-quality calves at Truro but have improved since Christmas, according to auctioneer and valuer Patrick Dennis of Lodge and Thomas.

He stressed pure-bred dairy bull calves were the hardest to sell at times.

“Good calves are in some respects in short supply and can be harder to find,” he told Farmers Weekly.

He listed calf quality, poor beef-market confidence, prime cattle values and a general sense of caution ahead of Brexit as limiting factors on some calf trades.

An increase in New Zealand and Jersey genetics was also changing the type of rearing calf coming through the ring, with smaller dairy cows producing smaller calves.

Weekly Wednesday sales at Truro typically number 60 to 70 calves, with above 100-head being sold during busy block-calving periods.

Prices have also firmed a little since Christmas for Hampton Hewitt of Markethill Livestock and Farm Sales, where 120 to 180 calves are sold every Tuesday at three-to-five weeks old.

Strong store trade has kept demand firm in Northern Ireland, where a margin can be made in calves that go on to sell for £800 to £900 as stores.

“It’s a long-term investment but forward stores that are crossbred from dairy are hitting 170-190p/kg and Friesian steers are at 130-160p/kg. In comparison the top-end continental stores are 190-220p/kg.”

He said calves were keenly sought after for rearing on and then putting out to grass in April and May.