A yarding of 119 Limousin females topped at 15,000gns with a cow-calf outfit at Borderway on Friday (18 August) as five pedigree herds marketed high-quality males and females and commanded a combined price tag of 380,000gns.

Redland Gazelle and her June-born heifer calf Redland Novalty knocked down to Geoff Hadfield of the Willowbank herd, Droylsden, Manchester.

She is out of Civelle and by Volcain and bred by RM and HJ Lewis, Lewis Farming, Wetherby. 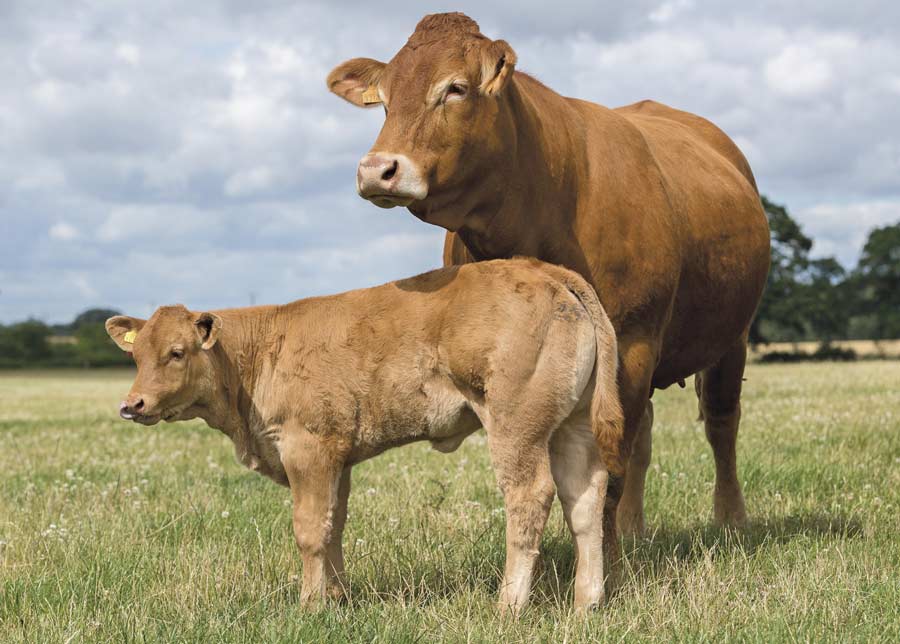 Redland Gazelle and her calf Novalty sold to Droysleden-based to Geoff Hadfield for 15,000gns © Wayne Hutchinson

Born in November 2011, Gazelle has been described as “one of the best cows to come out of France in recent years”.

Her heifer is by stock bull Eldorado, who won reserve intermediate champion at the 2011 National Limousin Show.

Next best at 10,800gns was Redrock Jazzylady with her bull calf Redrock Mallard at foot from JS and JO Dodd, Temple Sowerby, Penrith.

The April-2014 cow is by Frewstown Fbrilliant and out of Redrock Goldenlady, knocked down for 5,200gns to Mark Harryman and Sarah Warriner, Pickering, North Yorkshire.

Jill is another Frewstown Fbrilliant daughter out of Redrock Enid and her calf is by Japelou.

By Ampertaine Commander and out of Lowbarn Baacia, the easy calving and quiet sire Jimmy was bred by Mr M Burns, Glenside Farm, Ayrshire.

The seven-year-old is out of out of Dyke Crocus and by Cappaduff Aaron, who has bred many fine replacements in the Allanfaulds and Dyke herds and made 3,000gns to David Tomlinson. Her Dyke Gandalf calf sold to Messrs Pickering for 6,000gns.