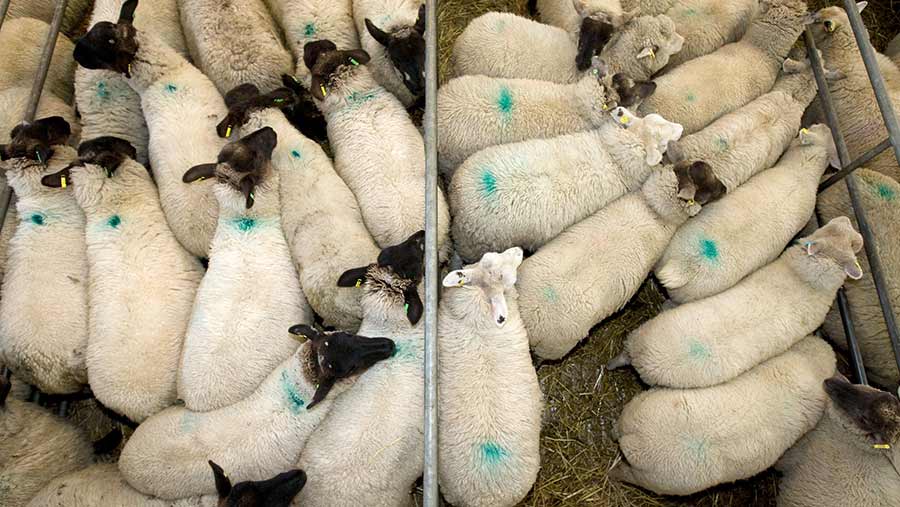 The dire spring and severe drought delivered a double whammy to lamb growth and left marts short of quality, as some areas struggle for forage.

Store lamb trade has firmed since the earliest sales and marts are now seeing a solid trade for forward continentals.

Greg Christopher of Hereford Market Auctioneers says some buyers at Hereford, particularly dairy farmers, will be lost this year because of the terrible forage situation.

“A lot of bidders are competing for the stronger end to put them on hoppers and get them away, but the longer-term lambs are seeing a lot of pressure,” he told Farmers Weekly. “Buyers don’t  have the grass to hold lambs for six weeks or so.”

“We are three to four weeks behind on last year and £2-£3 a head down. But it is quality that’s limiting price. The confidence in the prime lamb trade is still there.”

The best end is still making £60+ a head, topping at just over £70 at Bentham Auction Mart, where Greg MacDougall of Richard Turner & Son is also seeing lower numbers on the year (-30%).

“I would say the smaller ones will go dearer as things green up around the country,” he told Farmers Weekly. “Hopefully, in the longer term, the September and October trade will be strong and numbers will be up too.”

“Farms in the Lake District have had more rain, have more grass and some will be hanging on for another five or six weeks before selling stores. The hill lambs are much smaller this year.”

In Scotland, trade has moved in the opposite direction to last year, as August rain has strengthened demand and trade this year, rather than pulling the trade back as it did in 2017.

Store lambs were reported as being 1.2kg lighter on the year at Tiree Auction Mart on Saturday (18 August), averaging 33kg and £56.28 – meaning they were 11p a head back, but 6p/kg dearer for the buyers.

Numbers are building at Stirling United Auctions to the usual late-August to mid-September peak of 7,000-10,000 head a week, although numbers are expected to be lower than normal on account of a difficult lambing.

After a steady opening sale on 30 July, trade has lifted £3-£5 a head across the board.