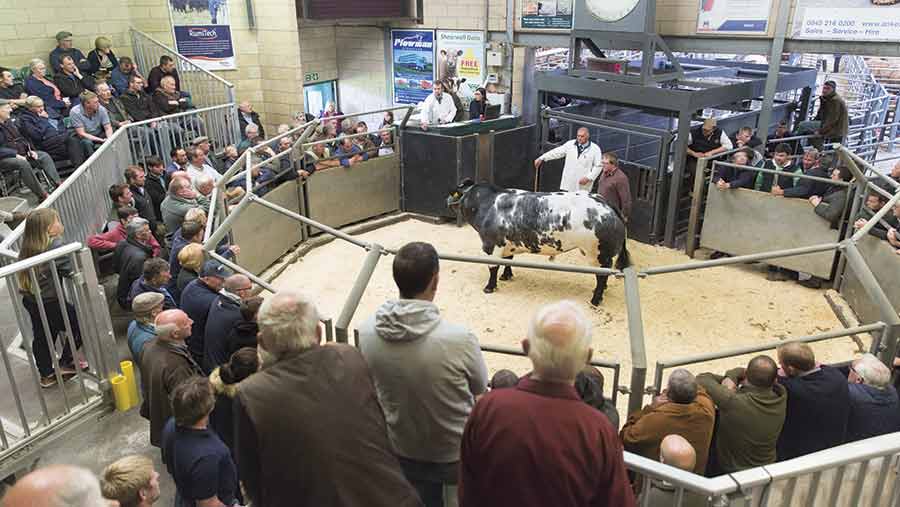 A top-quality entry of 470 beef breeding and store cattle attracted keen bidding at Newark on Saturday (18 June) with some bidders leaving a packed ringside empty-handed.

Two blue bulls from Adam Neachell’s Cromwell herd then made £4,000 and £3,200 respectively to Messrs Ashton, Boston, and Liz Haigh, Huddersfield.

Breeding females topped at £3,100 for Gascoine Ltd, Scarborough, for a five-year old Limousin-cross cow with a three-month-old Limousin heifer calf at foot, knocking down to Kate Burgess, Lincoln.

Next best at £2,800 was the leading Blue cow with a six-week old calf from N Pritchard, Herefordshire, to A Cash, Boston.

Second best from the Gascoine’s 27 cow and calf outfits was a second calver Limousin-cross with a heifer calf, catching the eye of S & P Padfield, York, for £2,500 as the consignment levelled at £1,938.88 overall.

JG Dring & Son were then back in the money, selling a four-year-old Limousin-cross heifer with a six-week-old bull calf for £2,350 to volume buyer J Webster, Branston, Derbyshire. Overall 28 Dring outfit levelled at £2,019.64.

Overall, auctioneer Paul Gentry said people were showing “a heck of an amount of confidence” in breeding trade, while continental cattle took the big money on the day and suckler producers sought stores to increase numbers.

“There’s been a massive swing back to continentals recently with a lot of producers who dabbled with native schemes returning continental crosses,” he told Farmers Weekly.

“They’ve had their fingers burnt really, they can’t get them into factories and have experienced poor growth rates. The breeds that were flying on Saturday were Blue crosses and Limousin crosses. People are going back to a musclier type of beast, while natives were a steady trade”.