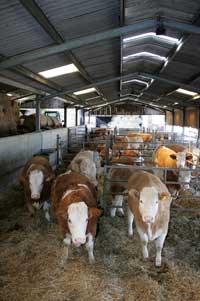 Recent policy changes to movement controls relating to bovine tuberculosis (TB) will provide owners of TB-restricted cattle in England and Wales with a greater range of options for moving and trading animals.

Until recently, farmers whose premises were under TB restrictions had limited opportunities to move or sell their cattle.

Controls in place to reduce the risk of spreading TB through the movement of animals with undisclosed infection, meant even animals testing clear for the disease could only move (under licence) for slaughter, or to restricted premises of an equal or higher TB risk status.

In the past, the lack of a greater range of options for the movement of animals from restricted farms has had a significant impact on farm cash flow and trading continuity.

Affected premises have also experienced problems with overstocking, animal management, shortages of feed or housing, and increased pressure on on-site facilities, such as pens and milking equipment.

Together these financial and practical issues have ultimately affected the management of farm enterprises and their long-term commercial viability.

The Welsh Assembly Government and the TB Eradication Group for England have recently reviewed existing disease control policies. The changes they have advocated should offer better support to TB affected farm businesses wishing to sell and buy cattle, without materially compromising disease controls.

Since November 2009 Animal Health has been implementing the recommend policy changes, which, if they are taken up by industry, will give farmers several new options to move or sell their TB restricted animals. This could, in turn, help them realise a number of practical and financial benefits.

In England, Animal Health is implementing Approved Quarantine Units (AQUs), dispersal sales and dedicated sales, while in Wales farmers are to benefit from the introduction of AQUs. Farmers in both countries will also be able to take advantage of a widening of the scope of existing Approved Finishing Units (AFUs), and changes that have come about following a review of specialist TB isolation units.

Once they have been established, the new AQUs will prove a vital resource for restricted farmers who lack the facilities for rearing animals.

When approved by Animal Health as a suitable destination for calves up to the age of 10 months from TB-restricted holdings, AQUs will be able to accept cattle for holding and further testing, with the ultimate aim of them regaining Official TB-Free (OTF) status.

For this to be achieved, and for disease restrictions to be lifted, calves sent to an AQU will need to complete two clear consecutive tests; with the second test taking place at least 120 days after the date of the last animal’s admission to the unit.

In addition to AQUs, livestock owners in England who want to sell their clear tested TB-restricted animals will be able to do so through newly introduced dispersal sales and dedicated sales.

Herd dispersal sales will provide owners with the option of selling their entire herd or reducing livestock numbers. These sales can be held on-farm subject to a risk assessment, with any cattle sold being eligible to move to AFUs, AQUs, to slaughter in both England and Wales and, if approved for a licence, to other TB-restricted premises in England.

Licences to move to other restricted premises will only be issued by Animal Health if the movement is considered to be low risk following a vet assessment. TB-restricted farms will be allowed to hold one dispersal sale in a calendar year, and only cattle from a single origin will be eligible for participation.

Dedicated sales, on the other hand, will provide farmers under restriction with the opportunity to sell their cattle under the conditions of the Animal Gathering Order (AGO).

To prevent any compromise of established disease controls, approved dedicated sales will not take place with any other gathering – and other gatherings will not be permitted on the same premises unless there is a clear separation in time, as required by the AGO.

To be sold at a dedicated sale, cattle – with the exception of calves under 42 days of age – must have tested clear for TB within the 60 days prior to the event, and they must not be reactors, inconclusive reactors or dangerous contacts. All cattle entering a dedicated sale must be sold directly to a slaughterhouse, an AFU or an AQU, and they cannot return to their farm of origin.

In addition to these new facilities, the potential scope of AFUs is also being broadened to provide the industry with an enhanced service.

AFUs were originally established in 2003 to provide an outlet for the finishing of clear tested cattle from TB restricted holdings lacking such facilities. Until now, cattle in all AFUs have had to be tested every 90 days, which can be burdensome for operators.

Following the policy changes, however, the enhancements to the system recently made by Animal Health means AFUs will now come in two versions in England: those with grazing, which can only be set up in annual testing areas, and which will require testing at 90 day intervals; and those without grazing but with wildlife proof housing, where testing at six monthly intervals will be required.

Also worth mentioning is the formalisation and extension of TB isolation units, which will allow farmers under restrictions to separate and isolate groups of cattle from their herds. This will facilitate the testing of the animals, with the aim of helping groups of cattle regain OTF status as quickly as possible.

TB isolation units – which can be set up on a restricted premises, on unrestricted premises or on a separate restricted holding – will be particularly useful to owners of high value or pedigree animals, including stock bulls and calves from dairy farms under restrictions.

The formalisation of the isolation units, and all of the other changes outlined here, share a common purpose – to enhance the opportunities for TB-restricted farmers to trade in cattle.

By providing the agricultural industry with a greater range of options, the newly implemented facilities and measures should help TB-affected farmers achieve more competitive prices for their animals and avoid some of the practical problems created by having to keep cattle in one place.

This will help to ease some of the pressure experienced by farmers working under TB restrictions, without compromising the safeguards and restrictions in place to prevent, control and eradicate bovine TB.

The new facilities are also likely to yield business benefits for enterprising farmers who convert or expand their existing operations to become AQUs or AFUs. By establishing their farms as Animal Health approved premises in either of these roles they will be able to realise a new, and potentially valuable, revenue stream.